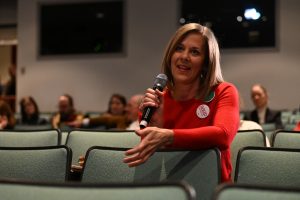 Future of presidential search process is yet to be known

Board of Visitors (BOV) Rector Tom Davis met with members of the faculty senate in a special meeting on Wednesday, Feb. 12. The meeting, originally scheduled to meet in Robinson B, was moved to Merten Hall as a result of the suspicious package incident.

According to the Twitter account of the Mason chapter of the American Association of University Professors (AAUP), Rector Davis explained in the meeting that a small number of faculty will be able to meet with finalists for the position, so long as they sign non-disclosure agreements.

This comes after the BOV voted on Friday, Feb. 7, to uphold the language of the faculty handbook, which allows opportunity for the general faculty to meet with finalists.

The timeline of the process is still unclear, as it has been explained that the board will not rush into any decisions.

“Rector Davis said that he doesn’t have a strict timeline, but what we’ve heard in the past is that they want to hire someone by the beginning of March, so the train is kind of steamrolling toward the station here,” AAUP Secretary Tim Gibson said.

The AAUP has called for a completely open, public search in which general faculty, students and staff get to meet candidates and give feedback.

In the event that a decision is made in regard to not having a public search — or even the hiring of a president — Gibson has assured that the AAUP will apply pressure to Rector Davis and the BOV.

He continued, “So, we’re going to hold their feet to the fire here and pressure them to live up to their promise and commitment to the faculty, and by extension the whole university community. So, we’re not done at all.”

Schar Professor Emeritus James Finkelstein, along with Judith A. Wilde, wrote in an article for the Chronicle of Higher Education — entitled “The Role of Confidentiality in Presidential Searches” — that there was a way to both protect an individual candidate’s privacy as well as uphold transparency for the institution.

They stated: “Here’s a compromise that would meet the needs of the candidates for some degree of confidentiality as well as the needs of the university for transparency: Maintain a closed search through the initial phases, but announce the names and other pertinent information about the final candidates, who will visit the campus, make presentations and meet and greet those whom they hope to serve in the future.”

In an interview with Fourth Estate, Finkelstein expanded upon their research in regard to confidentiality in presidential searches in general. He did not specifically comment on Mason.

“We’ve, over the years, looked at … contracts with executive search firms a little over 60 different presidential searches and one of the things that we looked at in terms of the contracts were the requirements for confidentiality,” Finkelstein said.

While public institutions had typically used a public process in the past, this has changed over time. Finkelstein explained that universities had previously allotted time for candidates to visit.

“In about the last 10-15 years, that began to change. In more and more searches, the candidates didn’t come to campus,” Finkelstein said. “The only people they ever met with were members of the search committee and their names were a secret. This is a very, very new idea, that presidential search can be conducted in total secrecy, where the campus community doesn’t know the name of the new president until it’s announced in a press conference.”

“Our research suggests that this trend toward secrecy happened along the same timeline as the increasing use of executive search firms to hire presidents,” he explained.

In Finkelstein and Wilde’s research, they found the executive search firms may not be required to do background checks or reviews of whether the candidates have been subject to a complaint. They only have to do what is required in their contract with the university.

“We looked into the language of these contracts of what search firms are required to do in order to conduct due diligence on a candidate,” Finkelstein said. “This is only what the contracts require them to do — they may do more than the contract says, but they’re legally required only to do what’s in the contract.”

Gibson used Finkelstein’s research to illustrate why he and members of AAUP want an open search process. “One of the reasons we have open searched for every other level of [the] university, including faculty, deans, provost, is because we believe as an institution that equal opportunity is premised on publicity, it’s premised on sunlight … processes that discriminate survive best in darkness, is our view,” Gibson said.

According to Shannon Davis, chair of the faculty senate, the presidential search committee has made its recommendation to the board on the candidates who should move on in this process.

Students Show Out Against Fast Fashion