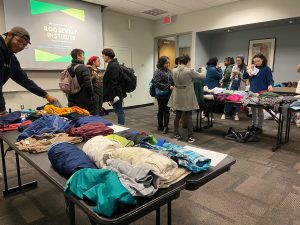 The fast fashion industry is a global force that does more harm than good. The multi-billion dollar industry is very resource-intensive.

In fact, “More than 60 percent of fabric fibers are now synthetics, derived from fossil fuels, so if and when our clothing ends up in a landfill (about 85 percent of textile waste in the United States goes to landfills or is incinerated), it will not decay,” according to the New York Times.

Roosevelt at Mason, a student-run policy think tank, wanted to do something about this. On Thursday, Feb. 13, the group hosted their second clothing exchange in Johnson Center meeting room C.

For weeks, they promoted the event by encouraging Mason students to bring items of clothing they wanted to swap. The result was four tables full of lightly-worn clothing up for grabs. At least 70 people funneled in and out of the room, the tables went through many changes as clothes of all types and colors replaced others.

The idea for an exchange came from William Mills, a senior economics major. Alyssa Roman, the president of Roosevelt at Mason and a junior government and international politics major, was also one of the event’s organizers.

“At first, [organizing the event] was very stressful,” Roman said. “But we had great people and great partners that helped out.” Among these partners were the Mason Environmental Justice Alliance and Mason For Survivors.

Afterwards, a presentation on the effects of the fast fashion industry was given by Mackenzie Earl, a senior environmental and sustainability studies major. She also gave some tips on how to reduce your impact and move away from shopping at stores who produce fast fashion items, including Forever 21 and H&M.

When talking about a consumer’s carbon footprint, much of the discussion revolves around food and transportation, but Earl emphasized that only  “10 percent of global carbon emissions just come from apparel, so if you’re trying to make sustainable choices, you can’t be having those conversations in one arena and not the other.”

According to Earl, the first step to reduce your impact is to cut down on shopping in general by buying items that you will get 50 or more wears out of. If it is difficult to cut down on your shopping, Earl suggests doing your research before buying from a brand. One app that she uses, called Good On You, rates stores on their sustainability and ethical practices.

Buying and selling secondhand is another great option. “It’s just about being intentional about giving your items of clothing a second life,” Earl said.

Roosevelt at Mason is passionate about causes that go beyond environmental sustainability. “We give everyone the opportunity to go after the change that we want to see in the world,” Roman said.

The group has a few events planned for the spring, including a panel discussion that will talk about policing on campus and mental health, and a Roosevelt at Mason initiative highlighting how Title IX handles sexual assault cases on Virginia campuses.

“Anyone who is interested in changing anything in education, environment, foreign policy or healthcare — we can help you with whatever you want,” Roman said.