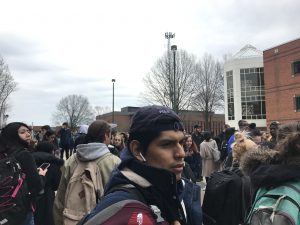 Mason’s Fairfax campus received a Mason Alert that warned students and faculty of a suspicious package left unattended in the Johnson Center (JC) on Wednesday afternoon.

After a careful and lengthy investigation the package, which was identified as a backpack, was deemed safe and campus activities resumed as usual.

When Mason PD officers and their K9 Unit arrived on the scene, the building was evacuated — along with neighboring buildings Robinson B and Harris Theater. Classes were canceled for the remainder of the day in the aforementioned buildings. Police placed caution tape around the perimeter of the building and several walkways were blocked.

Mason PD’s K9 unit performed a “sniff” of the item which resulted in a hit, which means the canine detected suspicious materials, alerting Mason PD of a possible threat. The Fairfax Bomb Squad, Fairfax City Police and Fairfax Fire and Rescue were called to campus to further the investigation.

On the day of the incident, Mason Chief of Police Carl Rowan was mostly concerned with clearing people from the potentially dangerous area so that Fairfax’s bomb disposal robot could enter and assess the situation quickly and effectively.

Mason’s Police Captain Emily Ross stated that calls and incidents like this “are not unusual by any means” but need to be approached slowly and with an abundance of caution.

“I would encourage people not to panic in those situations,” Ross said. “Follow police direction — there is a reason why we have the perimeters where we do. It allows all the emergency resources to get in, in the most efficient and timely manner that they can, so then we can get everyone back to normal business.”

Chief Rowan urged Mason students to sign up for Mason Alerts so that they are made aware of incidents and updates on campus.

At 4:40 p.m., the Mason community received an alert message stating that the suspicious package had been cleared by police and the affected buildings were reopened.