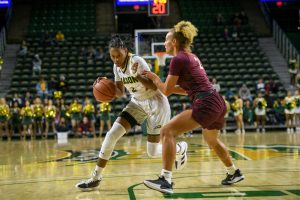 Lawhorne was born into an athletic family. Her mother ran track, her father played football, and her uncles and cousins played basketball.

She started playing basketball in the fourth grade and never looked back.

“From a young age I just really fell in love with the game, I’ve just been pretty serious about basketball since then,” Lawhorne said.

While Lawhorne looks to make a name for herself at Mason wearing number two, she originally wore the number four.

“Four is a really significant number to me. But since I couldn’t pick [that] because one of my teammates [had it], I just cut it in half and got two,” she said.

Lawhorne continued, “I’m the fourth one born in my family. My birthday is in the fourth month, April, and my favorite player growing up was Skylar Diggins[-Smith] and she wears the number four … Plus two is for me and my twin sister, I’m really close with my sister, so it’s just both of us so two was an easy number to pick.”

Lawhorne has looked up to Diggins-Smith since she started watching basketball, saying, “I just fell in love with how she plays. I don’t play the same position, I just really liked the way she plays. I like how aggressive she is, I just love the player she is and the person she is.”

In addition to going to her family members, if Lawhorne was struggling with something she would look to Diggins-Smith as a source of inspiration.

“I would look at stuff on her and see if she would ever go through something like [what] I would be going through at the moment. So I would just look at interviews maybe she would have had, and just see what she would have to say, and just go by what she went by,” Lawhorne said.

Junior Marika Korpinen and sophomore Livija Kaktaite both attended the same school, making head coach Nyla Milleson and her coaching staff familiar with both the school and its head coach.

“We first heard from her high school coach who we have a very good relationship with. And he thought it would be a really good fit for us, in terms of not only her playing ability but the type of person that she was,” said Milleson. 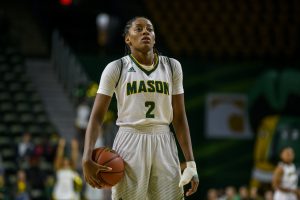 “First and foremost, her athleticism. She’s just a really, really good athlete,” said Milleson. “Then once we got to know her. She’s a great person. She is very, very coachable. And one of those players that we think is going to be really, really good player for us.”

Once she arrived, Lawhorne felt right at home.

“I really enjoyed my visit and talking to the team and the coaching staff. I fell in love with [the school] pretty quickly,” Lawhorne said.

From the very start, Lawhorne has been able to make a difference.

In her first game, she scored 16 points and grabbed 8 rebounds. Over the course of her first three games, she averaged eight points, four rebounds and one block per game.

But this was not the start Lawhorne imagined for herself.

“I feel like I did fairly well our first game, I think I did better than I expected. I thought I was going to struggle a little bit just because of the pace and the competitiveness [at the collegiate level],” she said.

She’s accomplished all of this with a cast on her left hand. Lawhorne is in the later steps of the recovery process, something that excites her coach.

Milleson believes that Lawhorne will be able to continue to develop, not just this year but in the seasons to come.

“First thing is to get her cast off of her hand so she’s not a one-armed bandit,” said Milleson. “But when she continues to learn and be more confident within the system, and where she can really get her points and score, she’s going to grow. Because right now she’s doing so much of it just out of natural instinct.”

She continued, “I think understanding the system is going to be important, continuing to work on her left hand and really being able to go both ways, but she can really do some things that we don’t have many people on our team that can do: rise up over the top of people, get rebounds that nobody else can get, finish and transition out on the layup that she can get out in front of people. So just really using her athleticism and where she can use it within our system is going to be big.”

However, if Lawhorne is having a difficult time she knows she can rely on her teammates.

“If I’m having a rough day or just a tough time during practice, they usually just pick me up, talk to me for a few minutes just saying and it’s okay just to breathe and just do what I can to just get through practice or whatever I’m going through the ages. [They] really [do] give me some words of wisdom, just because they’ve been through what I’m going through now,” she said.

Despite only being at Mason for a few months, Milleson has already seen Lawhorne grow as a player.

“The biggest growth has just been in her, opening up and allowing us to really, really coach her. She’s always been very coachable, but she’s a very shy, reserved person until you get to know her … And you can just see her confidence grow every single day. Tamia is a type of player that I don’t know that really quite understands what her ceiling is and doesn’t really understand how good she can really really be. So just keeping her out of her comfort zone and keeping her growing in all aspects of the game and off the floor is going to be crucial for her,” she said.

Overall Lawhorne thinks that she can make the biggest impact on the team with her athleticism and versatility.

“I do play the four position but I can play the three. And I feel like I can do a lot in the court. I’m able to guard, a guard or a person that plays the post so I feel like I add a lot to this team as far as versatility,” she said.

Milleson believes there’s one thing that makes Lawhorne extremely coachable — “Just the type of person that she is.”

She continued, “She really does get and understand when she makes a mistake or she maybe doesn’t do something quite the way that you want to, all you have to say is, ‘Tamia’ and look at her. And it’s like, ‘Okay I got you coach.’ So she really is trying to do the right thing. She’s trying to make improvements every day. And anytime you have a player that’s that coachable and that willing to learn, combined with the athleticism that she has — she’s just going to be a really special player for us.”

The Patriots return to EagleBank Arena to take on UMKC on Nov. 26 at 7 p.m.