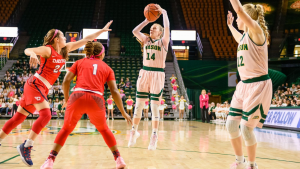 With the 2019-2020 season just around the corner, the women’s basketball team has an intriguing nonconference schedule ahead of them.

Last season the Patriots went 8-6 in nonconference play, a mark they hope to improve on this season. Six of the team’s 13 games will be at home, while the remaining games will take them as far away as Texas.

The Patriots will play two Power 5 schools. Both matchups are scheduled in the team’s first five games, two CAA opponents and one AAC opponent.

The team opens the season Nov. 6 at 6:30 p.m. at the College of Charleston. The Patriots have defeated the Cougars in their last two meetings, including last season on Dec. 31.

Mason’s first home game is Nov. 10 against Virginia Tech, who they most recently faced in the second round of the WNIT on March 18, 2018. The Patriots have won just one of the previous five meetings, with the lone win coming on Nov. 14, 2015.

Despite the fact that Virginia Tech was picked to finish 10th in the ACC, winning this game would be a statement win for the team.

For the third year in a row, Mason will take on American on Nov. 21. The Patriots have lost three of the last four games, last winning on Nov. 17, 2017. The Eagles were picked to finish fifth in the Patriot League and competed in the postseason for the second straight year last season. 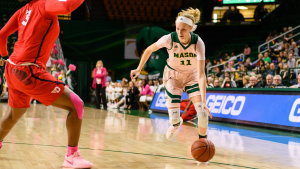 On Nov. 24 the Patriots will travel to University Park, Pa. to take on Penn State for the first time since 2005.

Playing the Nittany Lions provides the Patriots a second opportunity to get a statement win over a Power 5 opponent.

On Dec. 4, the Patriots will welcome Bucknell, who was picked to finish third in the Patriot League Preseason Poll. Mason has lost both of the prior meetings, with the most recent loss coming in 2008.

Last season the Bison lost just two conference games, won their conference tournament and nearly upset No. 25 Florida State in the first round of the NCAA tournament. This is a sneakily good matchup and well worth attending — despite the 11 a.m. start time.

The Patriots will travel to Newark, Del. on Dec. 29 to take on former CAA rival Delaware. The Fightin’ Blue Hens was picked to finish fourth in the CAA Preseason Poll.

Mason closes out their nonconference schedule by traveling to Dallas, Texas to take on SMU on Dec. 31. This will be the first meeting for these two teams. The game should be well-attended by Mason fans as junior guard Nicole Cardaño-Hillary hails from less than three hours away.

The Patriots open up conference play on Jan. 4 when they host George Washington.