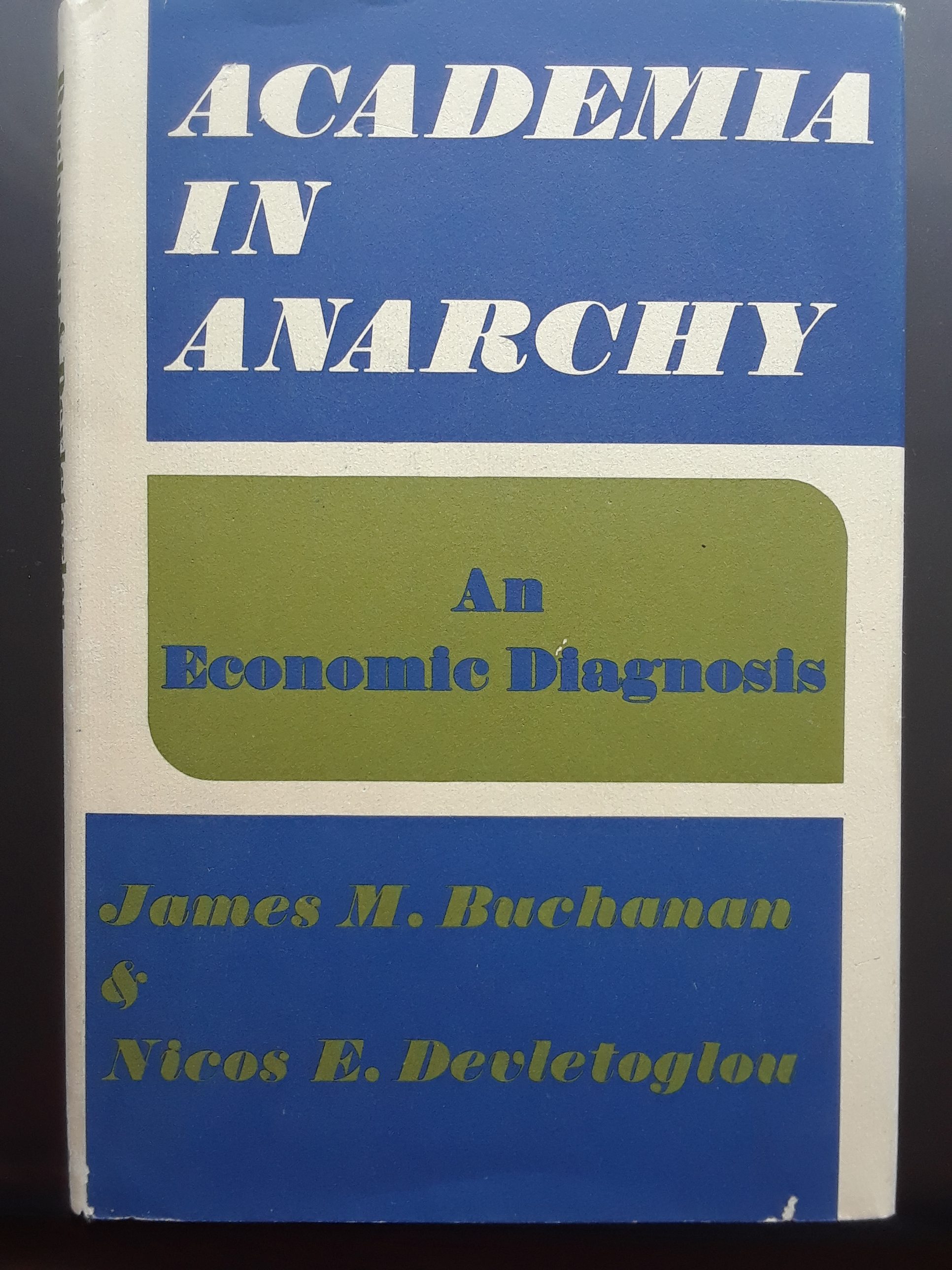 Ever wonder why college is so weird? It’s not like work and it’s not like home. It’s a weird, four(ish)-year span of our lives when we complain about other people making our food for us, sleep until noon while being considered “full-time” and lament being around the smartest people our society has to offer.

What a bizarre state of affairs. It’s only made weirder by all the activism you see on campus. If you walked into the grocery store and encountered people begging you to sign their petition on the environment or marching around with signs and shouting about the manager of the store, you’d probably never go back there again. But with universities, it’s a selling point — part of “the college experience.”

Why isn’t there anywhere else in society we put up with this weirdness?

Economists James Buchanan and Nicos Devletoglou thought the same thing in 1970 when they wrote their book, “Academia in Anarchy: An Economic Diagnosis.” Yes, it’s that James Buchanan of Buchanan Hall fame — one of Mason’s Nobel Prize-winning economists. He and Devletoglou, an economics professor from Greece, used their economics training to answer why universities are so weird.

They found that all the incentives are different in universities than they are anywhere else. For example, in a grocery store, the customer pays for products that food producers sell in a building owned by the store owner. It works out pretty well because customers want to spend as little as possible to satisfy their wants, producers are competing to satisfy consumers’ wants at the lowest price and the owner manages the store to satisfy customers and producers alike.

With universities, Buchanan and Devletoglou point out, every part of what works about grocery stores is flipped on its head. Universities provide a product — education — that customers don’t pay for, producers don’t sell and owners don’t control.

The customers of a university are students, but students largely don’t pay for their education. How? Financial aid. According to the College Board, the average published tuition and fees for an in-state student at a public four-year university in 2018-2019 was $10,230, but students only pay $3,740. Consequently, consumers are not sovereign at the university like they are at the grocery store. It’s odd to think about it, but the owner of the grocery store is completely at the mercy of his or her customers because customers can go somewhere else with their money and put the store out of business. Not so for the educator. Since financial aid comes from more sources than one can count, and there are numerous intermediaries between the student and the university, there is no possible way for educators to figure out what students want like grocery store owners figure out what customers want.

The producers at a university are professors, but professors don’t sell education. Admissions and marketing offices do. They’re fine people, but they aren’t professors. Professors have an incentive to come to work: their paycheck. But, since professors don’t make the decisions about who gets the product, they have no incentive to make the product good for the students.They provide good education out of the goodness of their hearts —a quality that varies greatly among humans. So long as the university turns applicants away (i.e. forever), professors know they will have students to teach no matter what, meaning they can teach the same lessons year after year — whether they are any good or not.

Finally, the owners of universities don’t control education. Since Mason is a public university, the owner is the Commonwealth of Virginia — represented by the Board of Visitors, which is appointed by the governor. They don’t make any decisions on how the university is run day-to-day. Administrators and executives like the university president and the various deans actually control the university. You don’t see anyone put the names of Board of Visitors members on signs to demand change. In fact, most people couldn’t even name one member if they were offered a million dollars.

Unlike at the grocery store where producers know what we want and we know whom to blame if something is wrong, universities are a tangled mess of blurred signals, which, to economists like Buchanan and Devletoglou, is anarchy. If there’s something we don’t like, we can’t leave a negative review, ask to speak to the manager, or —the most powerful action of all —take our money and go somewhere else. It’s not our money, the professors are going to do whatever they want no matter what and the people who own the place don’t call the shots. All that’s left to do is post on social media or get out the markers and poster board.

“Historic” Case Heard By The Supreme Court Of Virginia