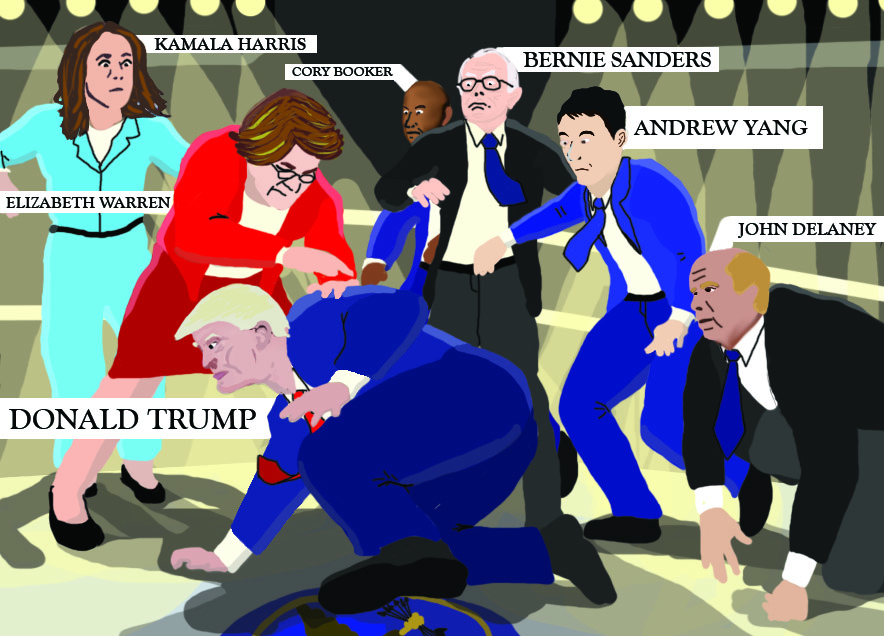 The Greatest Show on Earth

On the morning of election day 2016, Reuters/Ipsos State of the Nation polling gave former Secretary of State Hillary Clinton a 90 percent chance of winning the Presidential election. By the next morning, Donald Trump had shaken the world, securing 306 electoral votes and the Presidency of the United States.

An underdog result of this magnitude was the only appropriate ending to an election that was unparalleled in its sheer number of awe-inspiring events. It was the consequence of larger populist tidal forces, and given that populism is about pageantry, we must remember that no candidate can put on a show like President Trump.

What allowed President Trump to campaign the way he did was neither the preconditioned lack of trust certain Americans had with their government, nor was it Trump’s electric personality and name recognition, even though both of those things are important. It was also that Secretary Clinton was an apt target of criticism. She was a candidate many saw in a bubble, carrying the weight of a controversial tenure as Secretary of State and plagued by scandal regarding her usage of a private email server.

President Trump was able to cast doubt over the narrative that she was the most qualified candidate to ever run for office. With a crowded 2020 Democrat field, including the grandfather of the progressive socialist movement, a candidate who lied about her status as a Native American and one who was arrested for driving while intoxicated, I think it is safe to say the show we saw in 2016 was only the beginning. President Trump’s ability to capture media attention is what makes his presence in the 2020 Democratic primary process unavoidable, and also what makes his chances at re-election all the better.

To find evidence to back this claim, we need only to look back at the 2018 midterms. While Republicans may have lost the House of Representatives and six Governor’s mansions, they ought to see the midterms as an overall success. The GOP won three key Governor’s races in Florida, Georgia and Ohio, all states that are essential for a Trump victory in 2020. With regard to the Senate, Republicans achieved a net gain of two seats by flipping Senate races in North Dakota, Missouri, Indiana, and Florida. These victories were accompanied by successes in vulnerable states like Tennessee and Texas.

Even on a surface level, it is clear to see that the electoral map President Trump needs to meet the 270 threshold in 2020 looks strong and flexible. When we peek behind the curtain of Republican strategy during the midterms, we see Trump’s prospects of re-election look even better. The GOP was banking on President Trump’s presence on the campaign trail to boost their candidates, and it appears to have paid off. In Senate races, 57 percent of President Trump’s endorsed candidates won, including Mike Braun in Indiana. Braun is significant because he was widely considered a close underdog during the campaign cycle, until President Trump spent the night before election day campaigning on his behalf in Fort Wayne, Indiana. In terms of long term investment, Ron DeSantis, the newly elected Trump-like Governor of Florida, currently enjoys the highest approval rating of any Florida Governor in the past 10 years. This is a good sign for Trump’s 2020 aspirations in the state.

This is all clearly reflective of the voters that remain committed to President Trump’s mandate to lead the country. When we look at the mid-term success of the GOP juxtaposed with both progressive shortcomings and the outlook of the Democrat 2020 field, we see that President Trump has a firm platform to use for re-election.

Ahead of 2020, Democrats have a lot to reckon with. The first is that a crowded field is not a disadvantage. The second is that progressives are going to deliver the election, not cost it.

To be clear, there are absolutely valid concerns about whether or not the party will unite around the nominee, but pundits seem to be obsessed with this narrative that the left is too divided to rally around one candidate. I believe that come next June, they will be rather underwhelmed.

The truth is, a crowded field leads to a less divisive primary than the binary option Democrats had in 2016. In 2016, you were either in Hillary’s camp or Bernie’s. It was one or the other, and there was little-to-no grey area between the two. This led to an us vs. them feeling within the left, one side too moderate, the other too radical, and no room for either side in the other.

However, in this primary, the grey area is massive. The blessing of a crowded field is that nearly every ideology within the left is represented in one way or another. Liberals have never had a better chance at being accurately represented then right now. With a swath of candidates, a variety of overlapping policy positions and a common vision for our nation, it is much easier for Democrats to find an ideological home in the campaigns other than the candidate of their choice. Aside from this, the left is also creating the campaign and financing infrastructure necessary to support the nominee once they emerge. Multiple grassroots organizations and political action committees, including the Unify or Die fund by Swing Left, are already preparing for this scenario, and will help lead the party to rally around our eventual nominee.

With that aside, the other common narrative headed into 2020 is that progressive candidates are bad for our party, that they will cost us the independent voters we need to win the general election and that the party is moving too far left. I would argue that the only candidate who can win in 2020 is a progressive with a populist message. Independents will not deliver us this election, and we would be doing ourselves a disservice to nominate a centrist that alienates the young, progressive, diverse voters that delivered us the midterms and the Obama presidency.

In 2012, Obama lost the vote amongst Independents in every swing state except one, and lost to Romney amongst these voters by 5 percent nationwide. The only base that can show up in larger numbers than Trump’s is the coalition Obama first mobilized in 2008. But Democrats cannot just ask for these communities’ votes. We must earn them with the progressive, populist platform that mobilized large portions of these communities in 2018.

Over the next year and a half, we are going to hear endless hot takes. But right now is our time to get the very best our party has to offer, to prepare to unify, and to fight for our vision for this nation.

View all posts by Ian Waite →