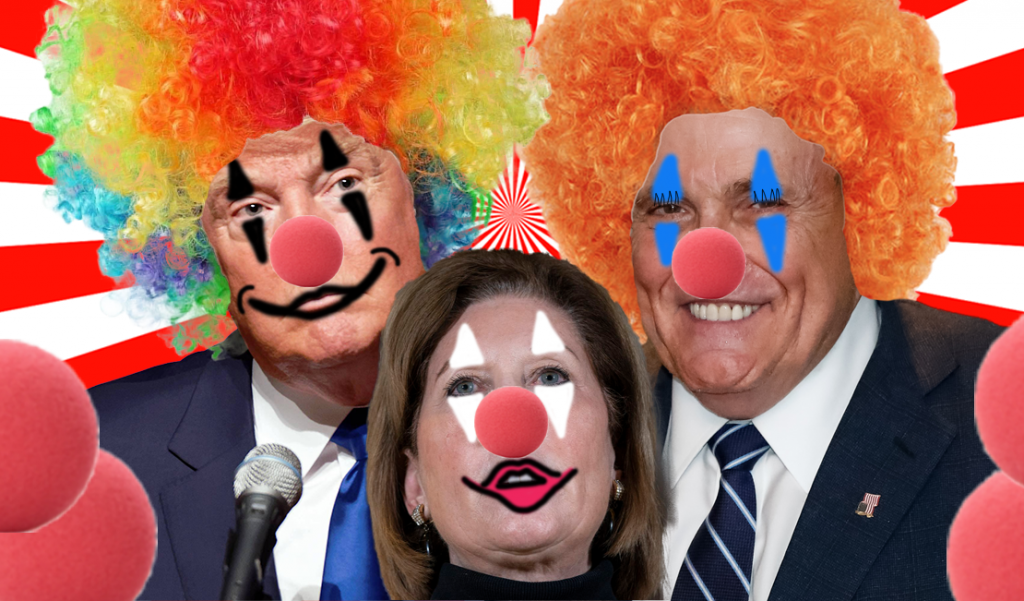 An important part of any performer’s act is knowing when the show is over. Even an otherwise good movie, song or play can be ruined by straggling on too long.

One would think Donald Trump, of all people, would know that. Before being president, he was a performer, the host of “The Celebrity Apprentice.” He was a very successful game show host who pretended to be a very successful businessman. We now know how fake the latter part of that was — Forbes reported he has at least $1 billion in debt — but the TV ratings were good, so he received his reward in full.

American politics has always been a circus. The conspiracy-minded amongst us should take solace in the fact that most of the time, nobody in government fully comprehends what’s going on in his or her own agency, let alone the entire state.

Every election cycle, voters choose whether they want a Democratic circus or a Republican circus. Some politicians can turn a phrase with the grace of an acrobat, and others maintain party discipline like a lion tamer.

No circus is complete without clowns, and politics has many of those as well. They provide occasional comic relief and sometimes needed correction, even if it’s irreverent — the wisest character in King Lear is the Fool. But usually, just like in a circus, the clowns have supporting roles in the performance of American politics.

In 2016, enough voters in enough states made their preference clear: Bring on the clowns.

Donald Trump campaigned as the man who would tell it like it is, make you laugh, and above all, put on a show. Mock his rallies all you want, but tens of thousands of people showed up to them and revelled in his performances, where he played a strange blend of insult comic and leader of the free world. He didn’t even go through the formality of putting an “Issues” tab on his 2020 campaign website. A vote for Trump was a vote for the show to go on, and that’s how Trump wanted it.

Somehow, though, the clowns have interpreted that message as, “Step it up!” Rudy Giuliani and Sidney Powell, attorneys (somehow) representing the president of the United States, have claimed that Trump really won in a landslide and that votes were changed by a motley crew of government employees, voting machine manufacturers, computer algorithms, communists and Venezuelans.

The technical term for that assertion is “bonkers,” yet many Americans believe some version of it. Trump administration/campaign officials (the line between them has become quite blurry) egg them on by begging for donations to an “Election Defense Fund,” which has little to do with the recount efforts and is really about paying off campaign debt.

All of this is very un-American except in one sense. Our official national motto may be “In God We Trust,” but our unofficial one is “Just Sue the Bastards” (you can learn more at JustSueTheBastards.com) and the Trump campaign has taken that mantra to a new level, filing dozens of lawsuits from sea to shining sea.

Courts have thrown the cases out just about as fast as the campaign has filed them. They threw out nine cases in one day (and it was Friday the 13th, funny enough). Peruse the opinions, and you’ll find that judges have almost as many words for “LOL” as Eskimos have for “snow.”

A Michigan judge wrote, “Plaintiffs’ interpretation of events is incorrect and not credible.” A Pennsylvania judge included this cheeky footnote in response to the campaign’s claim that vote counting was done with insufficient public observation: “It should be noted that the pre-canvassing and canvassing activities were also broadcast live on YouTube.” A Georgia judge dismissed a case with just one sentence: “After listening to the evidence, I’m denying the request, dismissing the petition, thank you gentlemen.”

That polite “thank you gentlemen” at the end was probably not deserved, but it more or less sums up the verdict of the American people on the Trump presidency. Trump became president through a fair and legitimate election, and he was voted out through a fair and legitimate election. The media opposed him, and Democrats impeached him, but ultimately he was undone by voters casting their ballots and an independent judiciary that won’t put up with his campaign’s nonsense.

Trump isn’t Napoleon or Qaddafi, and his campaign staff don’t have anywhere near the support or political talent to orchestrate a coup — they have a hard enough time holding a press conference. They’re clowns, and this is their last hurrah. The show’s over, but they are pretending not to notice. Soon enough, it won’t matter whether they notice because the audience will leave. Joe Biden will be president and there will be a fresh, new, Democratic circus in town. Let’s hope it has more acrobats and lion tamers.

THE FAILURE OF POLLS SHOULD REFOCUS US ON WHAT IS GOOD