Now, more than ever, there is a push for millennials to show up at the polls in November. Mason students, in particular, are paying attention and responding to the issues which matter most to them.

Before Wednesday’s debate, Mason students had clear ideas as to how they’ll vote in the upcoming midterm elections. A recent poll on Fourth Estate’s Twitter account asked student voters, “Which of [the] four issues is the most important to you in deciding who to for?” The options provided were immigration, gun control, access to higher education and impeaching President Trump. However, those with an outlying choice were encouraged to reply. 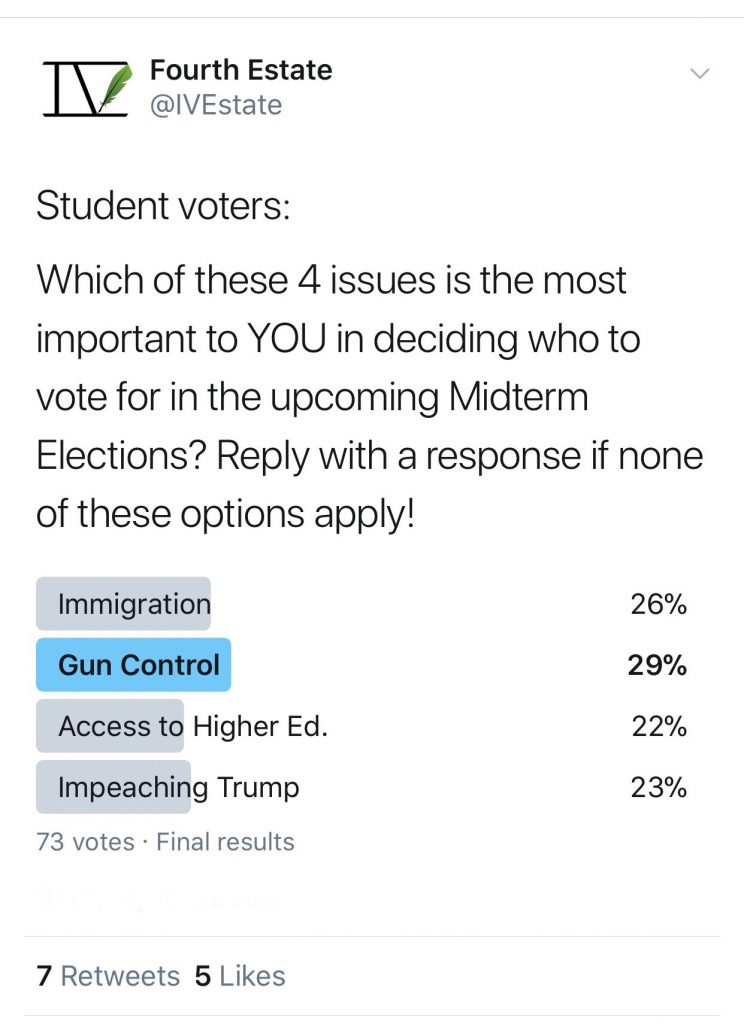 The responses pooled 73 varying opinions with gun control, leading at 29 percent. The other options came in close with immigration at 26 percent, impeaching Trump at 23 percent and access to higher education at 22 percent.

It is critical to consider that the poll requested only one response, whichever the student deemed most important.

For Stewart and Kaine, takes on the issues polled are on opposite ends of the political spectrum. Wednesday’s debate made it clear just how different both candidates view certain issues, particularly immigration. In a press conference following the debate, both candidates passionately shared their opinions on the matter.

“There is a big difference between someone who comes here lawfully, supports their family, doesn’t have a criminal background, and somebody who crosses the border illegally and commits crimes,” Stewart said.

Shortly after saying the United States is a nation of immigrants, Kaine further explained, “I am going to fight for the community … and comprehensive reform, and if Corey Stewart becomes Senator, he will always fight against the [immigrant] community.”

The candidates are divided on this matter, but junior communication major Paula Morales believes immigration is the most critical issue coming into this election.

“The issue deals with so much, Deferred Action for Childhood Arrivals (DACA) and Temporary Protected Status (TPS) [and more],”Morales said. “The Trump administration is just going to keep passing laws that’ll keep separating families, creating an even larger fear and distrust for the government.”

Although topping Fourth Estate’s poll, gun control and gun violence were not mentioned at the live debate.

“Gun control is one of the most important issues for me in the upcoming Midterms,” freshman Film and Video Studies major Abby Clark says. “It’s a very polarizing topic but we need to find a common ground, where both sides can agree in order to protect innocent people from being hurt.”

Stewart and Kaine are running with separate agendas. Stewart dubs his campaign as “Take Back Virginia,” and Kaine is running with the slogan “A Virginia That Works for All.”

Stewart is determined that his approach is the best way. Many times throughout the live debate, he referred to how “he [will] stir things up.”

Stewart notes that he wishes to work across ethnic and racial lines to accomplish what’s needed if elected. Kaine contrasted his campaign to Stewart’s, saying it follows an  “upbeat theme.”

The two candidates may hold drastically different ideals, but both consider the Senate seat as an avenue to compromise with the opposing party. Student voters are certain which issues will carry them to the polls. Now, it’s simply a matter of selecting which candidate aligns with their personal values and beliefs.