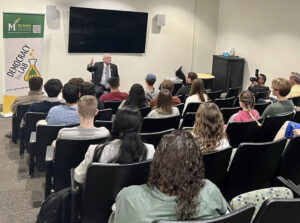 Rep. Gerry Connolly (D-Va.) visited Eisenhower Hall on Nov. 4 and met with students from Mason’s Democracy Lab for a conversation on the importance of local politics, the upcoming midterm elections and how they can get involved.

The Democracy Lab is one of Mason’s learning communities, allowing freshmen from the Schar School of Policy and Government to live and study together.

The event began with an overview of Rep. Connolly’s career. He discussed the work of the 117th Congress, which he described to be a historic congress that has passed more legislation than any Congress prior.

Rep. Connolly also shared with the students that he believes local government to be essential and talked about his time serving on the Fairfax County Board of Supervisors

“Democracy is built from the bottom up,” said Rep. Connolly.

The conversation then turned toward the midterm elections. Rep. Connolly, who is currently serving his 7th term as representative for Virginia’s 11th district, is up for reelection.

The election is likely to be a close call, with voters evenly split. CNN polls show Republicans holding a slight lead over Democrats in the House race.

“There could be some surprises,” said Rep. Connolly

Rep. Connolly believes Democrats have a chance to hold the Senate and hopes they can win a few more seats. He’s not so certain about the Democrat’s chances of winning the House.

“If you’re an odds maker, you’d be smart to put money down on the Republicans winning the election,” he said.

According to Rep. Connolly, margins are close and the election could go either way. He holds hope that the Democrats will pull through for a victory. He says the races to watch are Ohio, Iowa and Virginia’s 2nd District.

“If you notice that Elaine Luria actually wins her race for reelection, there’s a good chance Democrats can hold the house.”

One student raised concerns that a Republican victory would mean aid to Ukraine would be cut off.

“At the moment we have a strong bipartisan majority in Congress to support Ukraine. There are some prominent Republicans, such as Mitch McConnell, who have said we need to do more in terms of aid,” said Rep. Connolly.

However, according to Rep. Connolly, increasing amounts of conservative talking heads declaring the aid to be un-American may impact Republican support.

“If the base flips on them in Ukraine, where is the intestinal fortitude? Can we rely on them? I don’t think we can,” Rep. Connolly added. “But at the moment we’re ok.”

Dr. Jennifer Victor, director of the Democracy Lab, hopes Rep. Connolly can return to Mason again, bringing along his pet parrot, John Adams, who shares a name with the building where democracy lab students live.

“It’s fitting that the parrot is named John Adams and these students live in a dorm also named after John Adams. He’d make a great dorm mascot,” said Dr. Victor.