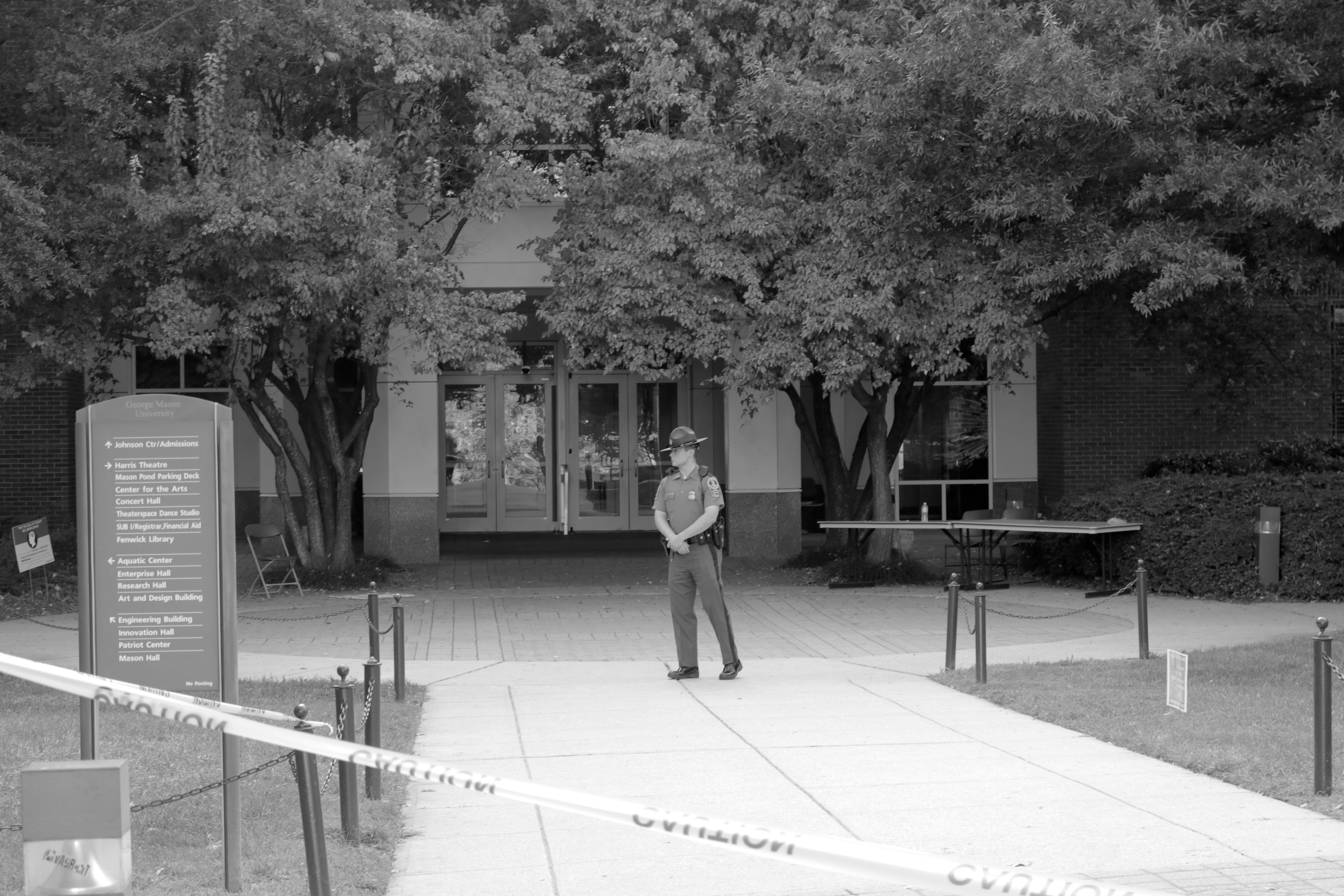 On Thursday, Oct. 13, students and faculty at Mason’s Fairfax campus were notified via Mason Alert of a possible bomb threat in the Johnson Center at approximately 4:05 p.m.

Following the alert, the building was immediately evacuated while Mason police set up a perimeter, stretching from Enterprise Hall up to North Plaza and down to the South Plaza. At this time, other agencies were called in for support, including Fairfax County police, Virginia State Police, the Federal Bureau of Investigation and the Bureau of Alcohol, Tobacco, Firearms and Explosives. All agencies, with the exception of the FBI, provided at least one bomb sniffing dog to the search.

At approximately 6:45 p.m., police began letting in Sodexo employees who had been working at the time the threat was received to gather their belongings. At 7 p.m., the public was notified via Mason Alert that while a search of the Johnson Center had been completed, and that no threat was found, police would keep the Johnson Center closed throughout the night due to the length of the investigation and subsequent disruption to activities within the building.

When asked if police had any leads, Mason’s Interim Chief of Police Carl Rowan Jr. said, “I cannot comment on any leads as this is an ongoing investigation. What I can say is that we take these kinds of issues very seriously and investigate thoroughly.”

In addition, the chief congratulated everyone within the Mason community on their response to the threat.

“I believe that the Mason officers and our law enforcement partners from surrounding jurisdictions did an excellent job of analyzing the threat and reacting quickly to what was believed to be a credible threat,” Rowan said. “Equally important was the reaction of the students and staff in the Johnson Center who evacuated the building in a rapid but orderly manner. That made our jobs much easier and we thank them for their assistance.”

Freshman Sehar Hooda agreed with Rowan, stating that everyone did an excellent job in reacting to the threat and applauding the police on their efforts to keep the community safe. Hooda also said that while she learned about the supposed threat from her roommate, she believed that the Mason Alert system did a great job of keeping the community informed as the threat unfolded.

When asked for her thoughts on the supposed threat, Hooda said, “I figured it was either a fake or that someone was trying to get out of their midterm.”

Mason wasn’t the only school to experience a bomb scare recently. WBDJ7, a local news station, reported that Virginia Tech was evacuated after receiving a bomb threat on Monday, October 10. Tuscarora High School, in nearby Loudoun County, was also evacuated earlier Thursday morning, according to Fox 5. Both schools were declared all clear. Rowan stated that authorities have no reason yet to believe any of these events are connected.

Rowan added that Mason Police want people to know that the safety of the Mason community is their first priority.

Check the Fourth Estate’s website for updates on breaking news.