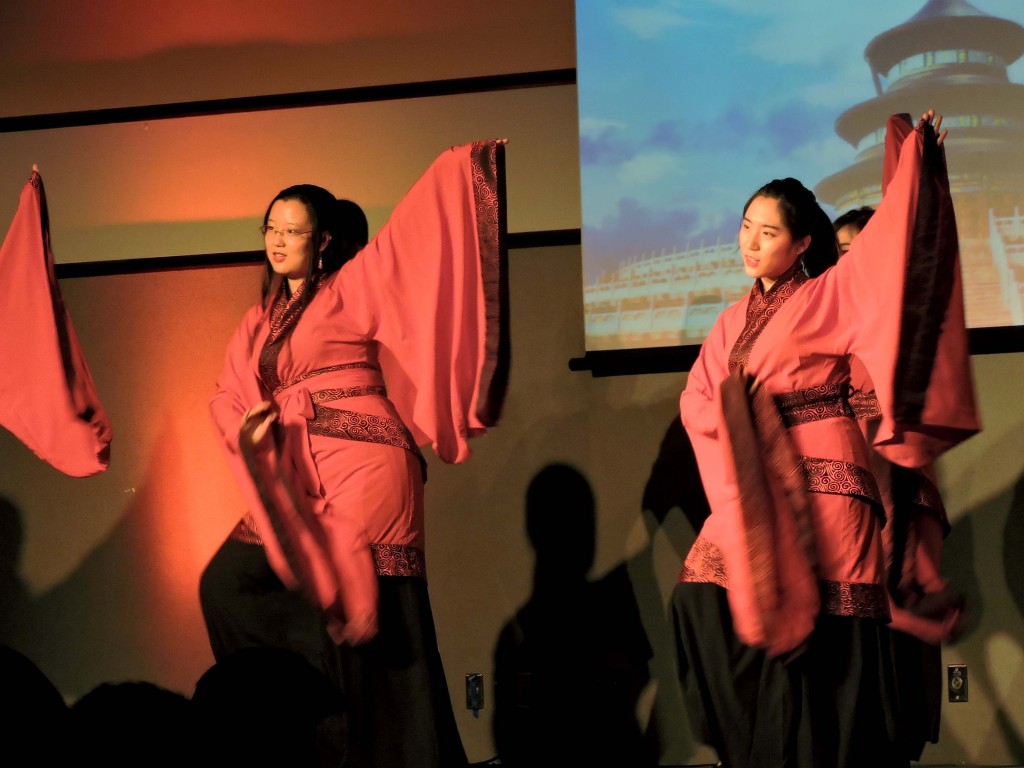 The Year of the Monkey arrived with its annual batch of Lunar New Year traditions, and Mason students did not miss out on the celebration.

Organization President and mathematics major Zhusong Mei said that the association hosts multiple events throughout the year that are open to everyone, but the objective is to help Chinese students transition into a new country while finding a supportive community.

“When Chinese students and scholars come to the U.S., they feel kind of lost and they are generally not good with English,” Mei said. “We have this organization to make everybody feel like there are still some people they can communicate with.”

Dewberry Hall was packed with students — and some of their family members — eating and chatting as a varied set of performances unfolded throughout the evening. Onstage were not only Mason students, but also performers invited from George Washington University, American University and Georgetown University.

One was a violin soloist and bioengineering major, Kristianne Rulona, who played Edward Elgar’s “Salut d’amour” beautifully for a quiet audience that listened attentively to her. After her performance, two children walked onstage to present her with bouquets of flowers.

Other performances displayed more traditional Chinese culture, such as a Chinese Ribbon Dance performed by theater major Kira Omans. The dance was well-received among audience members, particularly children in attendance, who moved to an open space to try to imitate Omans’s movements.

Scattered between these performances were games held onstage that students and children could volunteer to participate in. One of the games was charades, in which the players onstage attempted to act out and guess China-related terms such as Bruce Lee, the Great Wall or “Calabash Brothers,” a Chinese animated series.

“New Years in China is celebrated much differently,” said Ethan Yuan, a staff member in the ITS Support Center at Mason. He said that families in China await the new year by watching the New Year’s Gala, a series of performances broadcasted from Beijing from 8 p.m. to midnight on CCTV. Families will come together for a celebration that lasts 15 days, leaving the streets of Beijing empty as people travel home to be with family, make food and eat dumplings.

“People don’t go to work for 10 days. Beijing right now is empty — the subway, everything. They all go back home to celebrate,” Yuan, whose parents traveled all the way from China to celebrate with him in Fairfax, said. “Because my family is here, it feels more festive.”

Another tradition is the passing of red envelopes filled with money called hong bao from elder people to children as a sign of good luck for the new year. Children will receive different amounts depending on the giver. “For example, your grandparents will give you more than 500 Chinese yuan,” said Ziyi Jiang, an undeclared freshman who recently arrived in the United States.

CSSA’s Lunar New Year celebration created a familial feeling for students who, despite being away from home and family, welcomed the Lunar New Year by reviving Chinese traditions among friends.

“Just before this activity, we went to our friend’s house and we got dinner together,” said Jiang. He pulled out one red envelope from his pocket, lifting the flap to show the money inside. “This is just from our friends,” he said, laughing. “Just one dollar.”