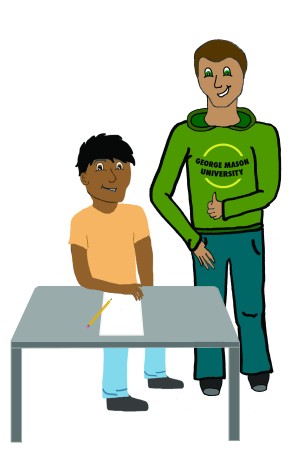 A Mason-affiliated non-profit that aims to help recently released juvenile inmates transition back into the community is currently working on a new center to expand its services.

Youth Outreach Services (YOS) was founded in September 1990 by Elizabeth Charity, a Mason alumna. YOS initially started by offering after school activities to at-risk youth, and recently, the non-profit has been looking to expand its services. The organization has been working with various Mason departments and local businesses to develop a Nontraditional Career Center in Woodbridge, Va., to house a variety of programs for recently released juvenile inmates. In addition, YOS recently asked the Virginia Board of Juvenile Justice for funding and access to juvenile correctional centers in order to begin a mentorship program for juveniles while they are incarcerated.

Ultimately, the goal is to reduce the recidivism rate by pairing at-risk youth with mentors who are college students or business leaders and owners. According to senior Daniel Lavelle, a project development manager for YOS, many juveniles leaving the system soon find themselves back in it.

“A lot of students are getting incarcerated, and then once they are released they are either rearrested, re-incarcerated or re-convicted … We’re trying to reduce the rate,” Lavelle said.

The Nontraditional Career Center hopes to accomplish this goal by providing a series of programs that will transform juveniles into productive members of the community. Mason engineering students created conceptual designs for the two-story center, which includes an art gallery, computer room, music room, music studio, paint studio, fashion studio, classroom, barber shop and a space for cosmetology services. The center will house a Job Training Program, Apprenticeship Program and Entrepreneurship Program, which juveniles would enroll in after the completion of the Job Readiness Mentor Program.

In the past, YOS has offered the Job Readiness Mentor Program, which focuses on self-improvement, employability and personal accountability “to guide each participant to self-actualization,” according to YOS’s website.

The Job Readiness Mentor Program helps turn the juvenile reentry population, or ex-juveniles, into “contributing members of society,” according to sophomore Phebe Ciemny, director of Social Media Relations for YOS.

Local businesses have already partnered with YOS to provide instruction and training in the areas of heating and air conditioning, construction, landscaping and demolishing, according to Charity, who is also the CEO of YOS. However, the non-profit is still seeking companies and business mentors in the areas of cosmetology, barbering, finances and real estate development. For example, juveniles in the Apprenticeship Program working toward a cosmetology license would be able to receive on-the-job training from business mentors, while simultaneously accumulating hours toward licensure.

The Entrepreneurship Training Program is partnered with Mason’s Social Entrepreneurship Society, a fairly new organization that aims to educate students about the basics of starting and operating a business, which involves business tax law, writing business plans and performing market research.

According to YOS’s website, students will be able to register a business, register a non-profit and write an official business plan, among other skills, upon completion of the program. 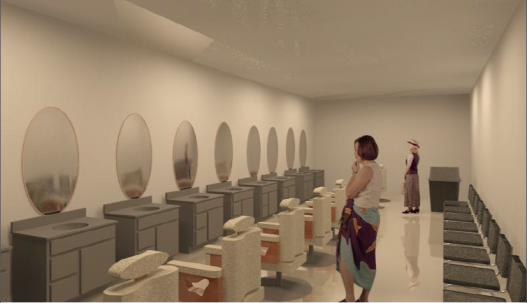 This allows students to “come out and do something positive and productive,” sophomore and YOS mentor Alexander Powell said.

Additionally, Mason’s Center for Advancing Correctional Excellence in the Department of Criminology, Law and Society has partnered with YOS to help conduct a research project. According to Charity, the project will aim to measure the number of students — both mentees and mentors — who complete the program, the impact it had on their lives, how it broke the recidivism cycle, the number of juveniles who went on to pursue a college degree, the number of jobs created, the amount of money the state saved and the percentage of college students who got a job in their area of study through the hands-on experience offered through the program.

YOS is currently in the process of selecting a construction company to build the center. One price estimate says phase one of the project will cost approximately $1.3 million and take eight months to complete. However, since YOS has not selected a company, no official estimates have been made. The non-profit will fund the creation of the center and its programs through fundraisers and donations, including a $100,000 gift from Dr. Faye Taxman, a university professor and faculty advisor to the Social Entrepreneurship Society, and “her team of researchers,” according to a press release written by Taxman in September 2015.

Keeping juveniles out of the system

In addition to planning the Nontraditional Career Center, YOS is looking to start another mentorship program. On Jan. 11, Lavelle went before the Virginia Board of Juvenile Justice to propose a program that would pair juvenile inmates with college students.

YOS was seeking funding for the program and access to juvenile facilities. Although they did not receive an answer at the time, Lavelle said the board members had a positive response to the proposed program.

While waiting to hear back from the state, YOS is actively recruiting college student mentors and is currently training about 10 Mason students. Charity said the non-profit intends to train another 90 mentors from Mason and other colleges in the area.

The goal is “to have Youth Outreach Services working with every single juvenile facility in Virginia and to have [mentors from] all the local colleges within those areas actually beginning to go into the juvenile facilities,” Lavelle said.

Upon release, juveniles oftentimes end up in the same environment surrounded by the same friends with a lack of proper guidance, according to Powell.

“I think just a lack of somebody being there as a proper example kind of leads some of these juveniles to make the choices that they make, and that’s why they fall into these situations,” Powell said. “I believe us as mentors have a chance to show them a different light.” 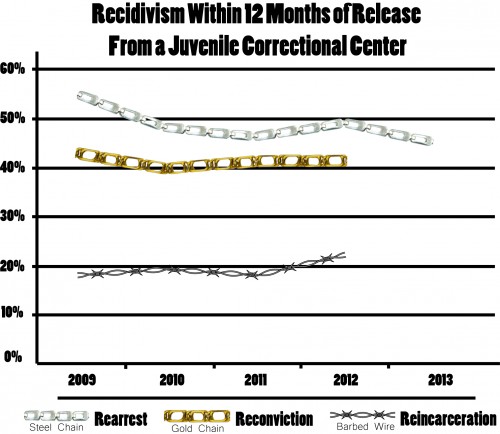 Juvenile recidivism rates from 2009-2013 according to the Virginia Performs website. (Megan Zendek/Fourth Estate)

The Virginia Department of Juvenile Justice measures recidivism rates for 12 months after someone is released from a juvenile facility. For example, “In 2013, rearrest occurred within one year for 46.3 percent of juveniles released from a correctional center,” according to the state-run Virginia Performs website. In 2012, re-conviction remained the same at about 40 percent and has since 2010. In 2012, reincarceration increased to 21.6 percent.

Ciemny, also a mentor, remarked that “more money is spent on getting kids in trouble with the law than [with] helping them recover or giving them the resources they need.”

She added that oftentimes there is a lack of resources, like an exit program, available to juveniles upon release.

When Lavelle was in Richmond to propose this mentorship program to the Virginia Board of Juvenile Justice, he was able to see juvenile inmates participating in the Community Treatment Model and realized that YOS services, including those that will be provided in the new center, are needed.

The Community Treatment Model is a program the Virginia Department of Juvenile Justice has recently implemented in the Beaumont and Bon Air juvenile correctional centers. The goal of the model is to reduce recidivism after release by creating a “consistent, rehabilitative community within each living unit in the facilities,” according to the Virginia Department of Juvenile Justice’s Facebook page.

Although the model provides support for the juvenile inmates while in the facility, there is no program to help transition juveniles released from prison back into everyday life.

“[The model] works on interpersonal communication, dealing with emotions, getting them [juvenile inmates] set up for a routine and getting them ready to transition out into society,” Lavelle said. “But what we did not hear was any sort of plans for them to receive any sort of mentorships once they were actually released from the institution, and that is what our organization does.”

Additionally, YOS is working to end the school-to-prison pipeline.

“Students [who] go to regular public schools…might have ordinary behavioral issues, but the teachers, they don’t have the patience to deal with them, so they refer them to the police and at that point in time they get arrested or … sent to an alternative school,” Lavelle said. “The school system fails because instead of educating the students and getting them into high school and on to college, they actually put them into the system.”

Cimney said that even though punishment might be an easier solution, it is not always the correct one.

She agreed with Lavelle that misbehavior in the school system is “sometimes taken more seriously than it needs to [be] … [and] kids need help and transformation, not punishment.”

According to the Center for Public Integrity, data from the 2011-12 U.S. Department of Education Civil Rights Data Collection showed that Virginia has the highest referral rate in the nation, referring 15.8 out of 1,000 students K-12.

From that point on, juveniles often stay in the system since it is hard to escape the recidivism cycle, according to Lavelle.

“What we aim to do is that once that transition happens, from the public school to an alternative school or potentially getting called to a police facility, that they refer them to us,” Lavelle said.

While the programs YOS offers are directed toward improving at-risk youths’ lives, volunteers may experience a personal transformation as well.

According to Cimney, working for a cause that you “can wrap your heart around” impacts your life.

“Putting efforts for positive change before other things in life has gotten me out my comfort zone, which is good because nothing great ever comes from comfort zones,” Cimney said, “YOS has directly enabled me to make a difference. It’s simpler than we think.”

Boyfriend hand-crafts Nimbus 2000 for his girlfriend