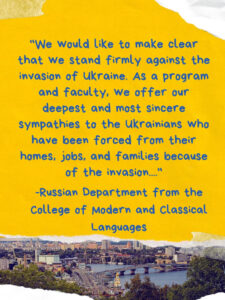 In the Russia-Ukraine war, Mason stands with Ukraine

Editor’s Note: This article was written and contains interviews taken on or before March 9.

In the early morning hours of Feb. 24, Russian President Vladimir Putin announced that he would be carrying out a “special military operation” against Ukraine.

Within the next hour of this statement being broadcasted, according to the Associated Press, Russian forces launched a series of missile strikes on Ukraine, specifically near its capital, Kyiv. Ukraine claimed that this resulted in the deaths of up to 40 soldiers and 10 civilians.  Since then, at least 1,500 Ukrainian soldiers have been killed and at least 474  civilians have been killed as of Mar. 8.

Mason extended its support to Ukraine and Ukrainian students on campus in an email sent out to the community.

The Russian Department from the College of Modern and Classical Languages released a statement that calls for peace and condemns the invasion of Ukraine by Russia. The statement is below.

“We would like to make clear that we stand firmly against the invasion of Ukraine. As a program and faculty, we offer our deepest and most sincere sympathies to the Ukrainians who have been forced from their homes, jobs, and families because of the invasion, to the hundreds of families of those who have died already during the invasion, and to the millions of people who have been and will be affected by these tragic events in Ukraine, its neighboring states, and abroad. “

Meanwhile, faculty at Mason who specialize in the field of Eastern European studies and political science offered their opinion on the Russia-Ukraine war and its implications for the rest of Europe.

Mark Katz is a Russian Studies faculty professor is a specialist in Russian foreign policy. Katz’s writing on the Russia-Ukraine war has been published in news outlets.

Katz argued that the Ukraine crisis urges America and Eastern Europe to take steps in preventing Russia from causing more damage outside of Ukraine. “This is the most serious war in Europe since the end of World War II.  I suspect that Russia will succeed in asserting its influence over Ukraine to a greater or lesser degree,” said Katz.

“The U.S. and its European allies must now work together to strengthen NATO in order to ensure that Putin does not try to forcefully spread Russian influence into Eastern Europe.”

Ambassador Richard D. Kauzlarich, A visiting professor at Mason, holds key insight on the Russia-Ukraine war, and predicted that NATO would respond with economic sanctions rather than troops in an article before the invasion began.

Ambassador Kauzlarich, who teaches a graduate course on the geopolitics of energy security, spent over 32 years as a Foreign Service Officer in the Department of State. He served as the Deputy Assistant Secretary of State for European Affairs, U.S. Ambassador to Azerbaijan and U.S. Ambassador to Bosnia and Herzegovina. Additionally, Ambassador Kauzlarich served almost eight years as the National Intelligence Officer for Europe in the Office of the Director of National Intelligence.

As the Russian-Ukraine war unfolds live before the world, Ambassador Kauzlarich stressed the separation between the Russian people and President Putin, and the catastrophic effects the invasion will have on Russia. “This is not a Russia-Ukraine situation. It is a Vladimir Putin-Ukraine situation. Russian interests have nothing to do with Putin’s unprovoked invasion of sovereign and independent Ukraine, “said Ambassador Kauzlarich

“He regarded the breakup of the Soviet Union as the greatest geopolitical catastrophe of the 20th century. As a former KGB officer, the Cold War never ended. He sees Ukraine as not a real country and invading it provided an opportunity to score a “win” against the US. The result has been a total disaster for Russia.”

He then continued, “Rather than splitting Europe from the US and winning an easy lightning war, he has encountered fierce Ukraine resistance and a more united NATO and a strong US-EU relationship committed to applying heavy economic sanctions against Putin and his cronies.”

Ambassador Kauzlarich is incredibly confident that the strengthened allyship between NATO and the US as a result of the invasion will be strong enough to prevent Putin from fulfilling his true goals.

“The scope of Putin’s miscalculations about (a) the capacity of the Russian army to accomplish his political goal of removing the current leadership of Ukraine, and (b) the degree of European unity and the US commitment to NATO is breathtaking,” said Kauzlarich.

“This makes him dangerous and unpredictable. US leadership, NATO unity, and strong EU economic responses will be necessary to sustain a common Western front in what will be an extended conflict — even after the invasion of Ukraine is over — with Russia.”

In addition to the Mason faculty, Brennan Keesling, who is a Mason alum, shared his thoughts on the crisis. While Keesling is not Ukrainian himself, however, he has experienced Ukraine, as he lived and worked there in the frontline of the last war.

“I volunteered to teach English at a school in Ukraine during the summer of 2018, right after my high school graduation. I worked in the city of Mariupol, which at the time was 10km from the separatist positions. While there, I befriended many Ukrainians as well as Ukrainian soldiers. They became a second family to me. To this day I still cooperate with the school via Zoom lessons.” said Keesling.

Keesling spoke about how he worries for his friends in Ukraine but believes that Ukraine has shown great nationality and strength through their invasion.

“The recent invasion makes me very sad, but not surprised. This war didn’t start last week, it has been going on for eight years. It only just transferred from a proxy war with bands of Russian troops disguised among local rebels, to open war with the Russian state,” said Keesling.

“My friends in Mariupol are living with bombs falling on their city, and a school and hospital have already been bombed. However, the Ukrainian military is defending much better than anticipated, and that makes me optimistic. Ukrainians will do anything to not live under occupiers,” he said. “I threw a coin in the fountain of Mariupol’s city park and wished for the war to end,” Keesling said. “That is still my wish now, and I pray for the families of all Ukrainian students at [Mason].”