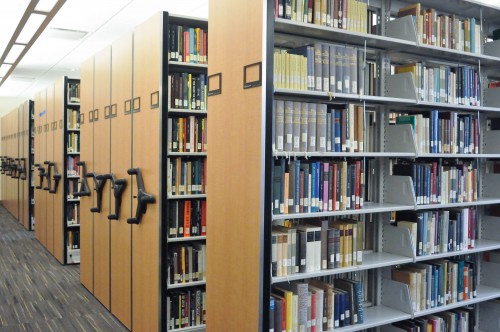 The addition to Fenwick library, which opened on Jan. 19, contains a lot of shining and brand new materials — including a laptop dispenser, modern furniture and windows upon windows. However, the addition is not just a new building filled with fun and new things. As a result of the extra space, Fenwick and Gateway libraries will grow more specialized in the services they offer to students.

Primarily, Fenwick will target experienced researchers while Gateway, located on the first floor of the Johnson Center, will focus on the inexperienced, according to John Zenelis, dean of libraries. He said graduate students and upperclassmen who have chosen majors typically fall into the first category and other undergraduates and new students usually fall into the latter.

Zenelis said Fenwick is designed for those who can conduct independent research and study and “be able to make a more sophisticated use of the higher end technology that exists in this library.”

He said it makes sense to differentiate in order to best equip the libraries to serve the varying needs of students.

For example, librarians at Gateway, “specialize in teaching and learning, whereas the library faculty we have in Fenwick library… specialize in subject areas, in the disciplines,” Zenelis said. “…They’re able to work with students in a different way, on a different level, and all of this is dictated by the needs of the students.”

The new Fenwick space, which was funded by $60 million from the state of Virginia, reflects this push to differentiate between the two libraries on the Fairfax campus. For example, the fifth floor of the library was designed specifically for graduate students. It is filled with 55 individual study carrels, according to Jennifer Wilder, development and communications coordinator for University Libraries. Each carrel comes with a cubby equipped with a lock where students can store research materials. Wilder said a student can reserve a carrel for an entire semester and they are available on a first come, first serve basis.

These carrels are only available on the fifth floor, and since they fill the entire floor, the fifth level varies significantly in looks from the other levels of the new library. While undergraduates have access to the floor, Zenelis said he does not expect many to utilize the space. 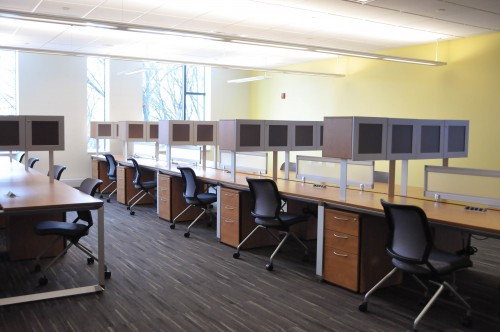 Study carrels on the fifth floor of Fenwick were designed to be places where graduate students can conveniently store research materials. (Johannah Tubalado/Fourth Estate)

Other features in the new library that are tailored to fit more experienced student researchers can be found on the second floor. This floor includes a research commons and what Wilder termed “research row,” a string of offices for all of the subject-specific librarians.

These librarians will focus on helping upper level students who need “expert assistance in areas of not how to do basic library research, but how to do research in various subject areas within their majors,” Zenelis said.

At the other end of the spectrum, inexperienced researchers can find the help they need at Gateway Library. According to Zenelis, introducing new Mason students to the university libraries has always been Gateway’s focus. In fact, that is the meaning behind the library’s name — it is meant to function as gateway into realm of university libraries.

Patricia West, head of teaching and learning services for Gateway Library, said that over the years, Gateway has lost some its focus on the students it was originally designed to help. She said that as Fenwick became more and more crowded, some of its people and materials moved to Gateway, which made it difficult for Gateway to focus specifically on students unfamiliar with research.

“One of the cool things about the new Fenwick opening is allowing Gateway to focus more on that mission,” West said. “Because one of the things that started to happen over time as Fenwick became very cramped for space, is they would do things like put collections that really belonged in Fenwick, [like] their research-focused collections of books, to be moved over here because of lack of space… Our mission as the undergraduate gateway library was more or less diluted by space constraints, et cetera.”

Since the renovated Fenwick totals 300,000 square feet and has a seating capacity of over 2,000, West hopes that Gateway can get back to its original purpose.

“Now that we have this new, shiny space…one of the neat things about this is it does kind of allow us to get back to our core mission,” West said. “I’m encouraged by that.”

Zenelis said there are plans to renovate Gateway Library but is unsure when construction will begin because the project is waiting on funding. He said the plans include consolidating the library onto its second and third floors and transforming the whole space into “more of a learning commons,” similar to the current first floor of the library.

West said these common spaces are a good fit for Gateway because they are a departure from traditionally quiet library spaces.

“A lot of times students in the Gateway library will complain to me about the noise, and it’s like, this is never going to be a quiet space,” West said. “It was designed as a collaborative space, and so I have to tell people, if you’re looking for quiet, this is not the place.”

She said it makes sense to distinguish between the libraries because, in terms of research, Fenwick and Gateway are trying to assist two distinct groups.

“The populations are so different,” West said. “…The focus on higher level research, graduate research, faculty support and so on is quite different than teaching someone how a university library works. [Those are] very different goals.”

Click here to view a gallery of the new Fenwick library.