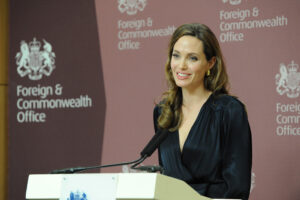 Courtesy of the Foreign & Commonwealth Office

Dr. Katherine Scafide is an assistant professor in the School of Nursing and has worked within the field as a sexual and pediatric examiner for years. This past month, her current research on Alternate Light Sources (ALS) was referenced within the Violence Against Women Act (VAWA) by actress and humanitarian Angelina Jolie, as means to help identify hard-to-see bruising in darker skin tones. Jolie has used her platform for humanitarianism, including receiving the Jean Hersholt Humanitarian Award from the United Nations Refugee Agency for her work in 2013.

Jolie took the opportunity to meet with Scafide on March 17 on the work she has done in order to address the inequities that exist within the medical field in order to help victims of violence.

“It was definitely a surprise that my work had garnered that kind of interest,” said Scafide. “It was exciting to meet her and she is quite the humanitarian.”

Jolie and her colleague Ruth Glenn, leader of the National Coalition Against Domestic Violence, spent years lobbying for the act to be reauthorized under Congress. According to the Department of Justice, part of VAWA’s initiative with the bipartisan authorization is that it will continue to use resources to prevent and respond to gender-based violence and provide critical services for survivors.

In addition, the act will include Kayden’s Law, which is legislation inspired by the murder of a seven-year-old Pennsylvanian student by a family member. Legal incentives have now been made in order to limit the risk of harm to children.

“When somebody harms a child, if it’s a stranger, the way the law responds is quite strong. When it’s somebody within a family, within a home, it is responded to less” said Angelina Jolie in an interview with NBC News.

The reauthorization of VAWA will be a milestone for survivors who are a part of the movement. Individuals like Scafide were able to be a part of this process. When she first started out as a forensic clinician, she recognized that her adult and pediatric patients who were victims of sexual violence and had dark skin were not getting their bruises detected accurately at the time.

“You want to provide these patients with the best care possible,” Scafide emphasized. “What we document has such a huge impact on the progress that they are going to make that is appropriate for the case. We don’t feel like we can do the best that we can for patients with darker skin pigmentation.”

Scafide went on to explain that research shows patients who have dark skin and experience domestic violence, feel like their bruises are seen as less severe by different prosecutors, judges, or the police as they go through the system.

Alternate light essentially means ‘light of a specific wavelength’. For example, alternate light is used at crime scenes to detect blood or hair follicles. This type of light source is also useful for detecting injuries in patients. Dr. Scafide noted the difference between this and other light sources such as hard light and white light, is that the Department of Justice has recommended using alternate light to help improve injuries of sexual assault or any other forms of violence.

“There really hadn’t been research at that point to support it,” said Dr. Scafide about her research. “My concern was we can’t use this technology without establishing a scientific foundation for it being effective for helping us detect bruises.”

After receiving funding from the National Institute of Justice, Dr. Scafide was able to conduct the largest bruise study ever recorded in the forensic literature. She was able to partner with a team at Texas A&M and created a study where they created bruises using different mechanisms and used alternate light sources to detect the different wavelengths of the bruises.

After 2,900 visits and 60,000 observations on bruises, Dr. Scafide and her team discovered that alternate light sources used with purple light increases the likelihood of detecting bruises up to 5x better than using white light across skin tones. “It’s very exciting that we were able to provide the evidence to support using it in practice,” said Dr. Scafide.