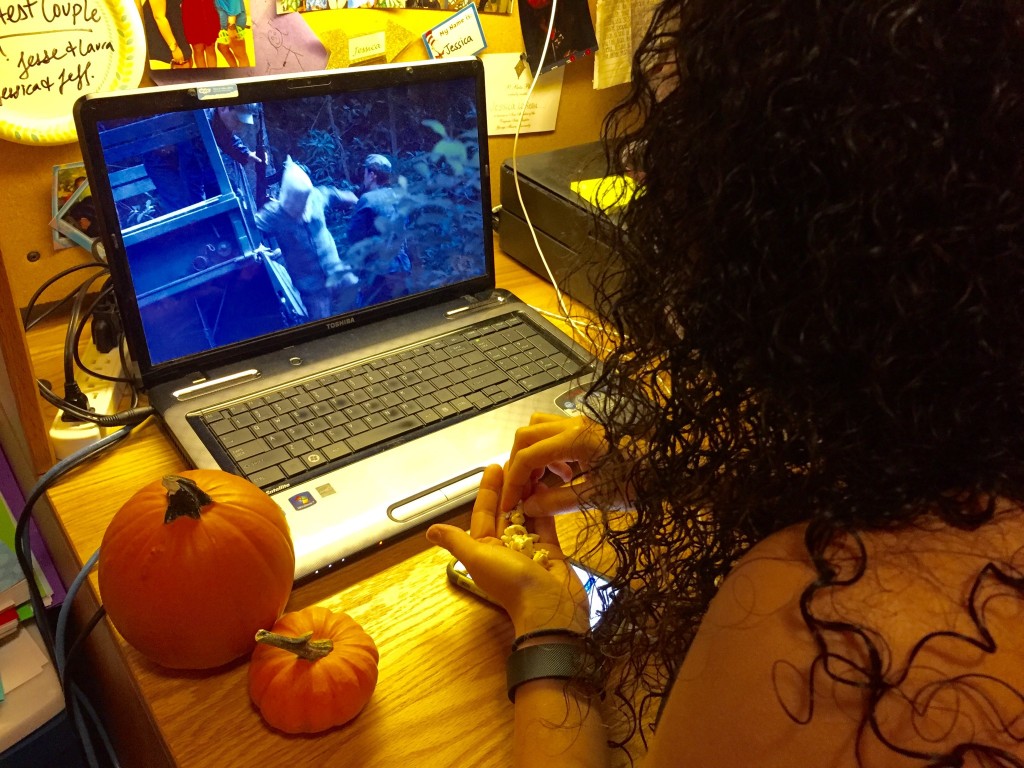 Halloween is a nostalgic holiday for many college students. Because trick-or-treating is not an option anymore, students look for other ways to celebrate. For Mason students, watching scary movies is one of the most spook-tacular options.

“‘Halloween’ is my favorite fall movie,” said freshman Stephanie Crespo. “I feel like it’s a classic old movie. It’s scary, it’s suspenseful, it takes place on Halloween, and has a good storyline. I love it.”

Made in 1978, “Halloween” introduced the iconic Mike Myers to the world. The movie, which takes place on Halloween in Haddonfield, Ill., tells the story of escaped murderer, played by Mike Myers, and his hunt for high schooler, Laurie Strode.

Another Halloween movie staple for Mason students is “Hocus Pocus.” The movie takes place in Salem, Mass., famous for the seventeenth century Salem witch trials. One Halloween, three children bring three witches back from the dead several centuries after their trial. After realizing their mistake, the children must spend the night trying to stop the witches from stealing the souls of children.

“I like ‘Hocus Pocus’ because I like the town of Salem and I’m interested in the witch trials,” said freshman Alicia Muir. While the movie is not quite historically accurate, it does include some references to actual events.

Many love watching “Hocus Pocus” because it brings back childhood memories. “It was the first Halloween movie I saw and I liked that it’s all about three sister witches,” said freshman Manal Abdulrahman.

“Halloweentown,” a childhood classic that premiered on Disney Channel in 1998, is still a favorite among children–and college students–today. The film tells the story of thirteen-year-old Marnie who finds out she is a witch and must grapple with the consequences.

“’Halloweentown’ is my favorite Halloween movie because it gives me fall and Halloween nostalgia all year round,” said freshman Gillian Saul.

“The Nightmare Before Christmas,” which is considered by many to be a cult classic, is another popular Halloween movie. Released in 1993, the film tells the story of Jack Skellington, a skeleton who has grown bored with living in Halloween Town and decides to venture into other towns. He finds Christmas Town and is immediately captivated.

Like other Halloween classics, “The Nightmare Before Christmas” is beloved among Mason students for its connection to family. Many also appreciate the film’s unique story and visual effects. “It has always been a tradition to watch it [“The Nightmare Before Christmas”] with my family,” said senior Cindy Herrera. “It has a little bit of suspense, and I like the director of the movie [Tim Burton]. I think it is cool that the characters are created by claymation.”

The film is also known for its soundtrack, which features songs like “This is Halloween,” “What’s This?” and “Oogie Boogie’s Song.” Freshman Chelsea Uwanaka likes that the songs put her in the “Halloween spirit.”

Freshman Alyson Kornberg agrees, adding that she likes that she can watch the movie twice a year. “I love that you can watch it [“The Nightmare Before Christmas”] for Halloween and Christmas. The animation is amazing and I love the music,” Kornberg said.

“My favorite Halloween movie is ‘Trick ‘r Treat,'” said freshman Cat Ross. “I love the plot and it has a certain scary aura to it that will get you in the Halloween mood.”

“Trick ‘r Treat” is a movie involving four plots, all of which take place in the same town on Halloween and are connected to a single character named Sam.

Although “Friday the 13th” does not take place on Halloween, it is a holiday favorite, especially since it introduces the hockey mask-wearing, chainsaw-yielding Jason, an iconic movie villain.

“The Visit,” which was released last month, tells the story of brother and sister, Tyler and Becca, who learn a frightening secret when they visit their grandparents.

“Crimson Peak” opened October 16 and is still in theaters. The movie takes place at the turn of the twentieth century and tells the story of recently married Edith, who uncovers chilling secrets while staying in her husband’s castle.

“The Green Inferno” comes from director Eli Roth, the mind behind movies like “Hostel” and “Inglorious Bastards.” Released September 25, “The Green Inferno” is about a group of activists who travel to the Amazon and must fight for their lives when they encounter a tribe of cannibals.