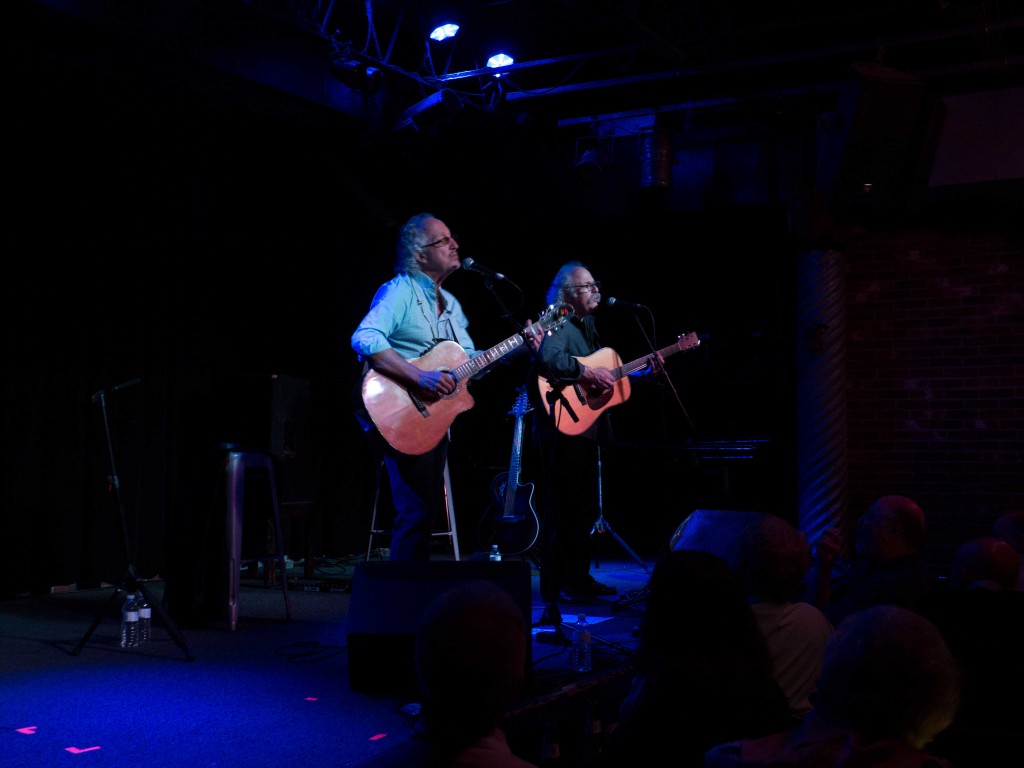 Folk-rock duo Aztec Two-Step took the stage on Sept. 26 at Jammin Java in Vienna, Va. to celebrate the 40th anniversary of their second album, Second Step. Before the concert, the duo, comprised of Rex Fowler and Neal Shulman sat down for an interview about their longstanding career and the advice they have for young musicians looking to achieve the same.

On “living the dream”

The duo’s past and present success of performing for a living is a feat that many music students dream of accomplishing. Fowler himself describes the duo’s career as “a dream come true.”

“Every once in a while you have to pinch yourself and say, ‘Wow, we’ve been able to hang in a do what we want to do — our own original music,’” Fowler said.

Though they have never had a hit song, Fowler explained that he and Shulman have been able to keep their career going thanks to their solid beginnings and continued work.

“We had a lot of what they called ‘turn table hits’ in the ’70s, which was a lot of progressive FM radio [and] college radio, which is where we built the foundation for our career, and that was very important,” Fowler said. “So it’s pretty cool that we’ve been able to do this. And that’s the one thing that probably makes us a little more unique than somebody who had that breakthrough hit. So we’ve always just done the best and tried to build little steps as we’ve gone along.”

These little steps have carried them into a career that includes over a dozen albums, performances at both Carnegie Hall and Lincoln Center as well as nonstop recording and touring since the early ’70s.

Throughout music’s history, countless bands have fallen apart, but not Aztec Two-Step. Even though they met by chance at a coffee shop’s open mic, Fowler and Shulman have been able to beat the odds and stick together for over 40 years.

“It’s certainly unusual… Most bands don’t hang in there that long,” Fowler said. “I think being a duo, even though it might sound easier, might be little more difficult. Because you have a dynamic between two people, and you don’t have a third vote to go, ‘Ok, two against one.’”

Fowler knew they had created something special when he and Shulman performed for the first time together just a about week after they met.

“For me, it went from like playing solo and getting golf applause, to going out on stage as a duo and we blew the freakin’ room away. I mean, we both were flabbergasted… So we knew we had something there.”

Like other relationships, communication is key in making sure everyone stays on the same page, according to Fowler.

“Whatever our differences are, and of course every two people have them, you really have to work at getting the communication and all that stuff,” Fowler said. “It takes a lot of work to make things go smoothly.”

Shulman added that being a “good hang” is another important quality in being a good band mate.

“You’ve gotta try to be good company” he said. He also joked that, in order to keep a healthy personal dynamic, it’s a good idea not to hit on your band mate’s girlfriend.

In addition to making sure conflicts are minimized, the duo noted the importance of young musicians to stay on top of the business side of the industry.

“Everyday counts. You have to really focus on doing the creative side, but also doing the stuff that builds the bones of your career, the infrastructure,” Fowler said. “That means, get yourself a Facebook page… Keep up with the technology that allows you to put your music out there.”

He explained that students can do a lot in today’s music world to get themselves discovered.

“It’s gotten to a place now where you really don’t even need to make a hard record,” Fowler said. “You put your music up on a cloud, you send the link to a radio station, you hope that they’ll listen and download, and if they like it, they’ll download it and play it. It’s just so different than it used to be, but you have to be smart about all of that infrastructure as well as the creative side.

Perhaps the simplest, but most powerful bit of advice the duo shared was to not give up.

“The most important thing is, if you really believe in yourself, perseverance,” Fowler said. “Because if you don’t persevere, then you’ll be like so many other people who fall to the wayside, and you’ll be left with your dreams but not necessarily your career.”