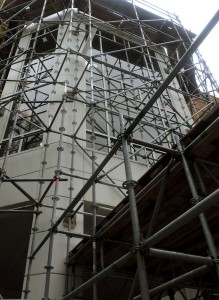 Metal scaffolding at an entrance to the Johnson Center will be taken down in upcoming weeks as roof replacement is completed. (Sarah Kladler/Fourth Estate)

Students came back this semester to find that the heavily trafficked Johnson Center was undergoing construction. The workers around the building and metal scaffoldings at every entrance were a result of a roof replacement project.

Steve Morehouse, interim director of Student Centers, said the replacement is almost complete. Most of the scaffoldings have been taken down as the crew completes finishing touches to the roof.

“The majority of the roof actually is done,” Morehouse said. “We’ll be finishing up all the metal work and all that through the rest of this month.”

Once the roof is complete, he said it might take the crew a couple more weeks to take down all the scaffolding and move off-site. Morehouse said he expects that to be finished around the middle of November, although the schedule is weather-permitting. He said everything is scheduled to be completely finished towards the middle of November, again weather permitting. Crew workers recently lost a few days of work due to Hurricane Joaquin.

The safety netting on the third floor will also be taken down once roof repairs are finished. Morehouse said the netting was installed to protect Johnson Center occupants from ceiling tiles that might potentially fall during repair work.

He said the roof replacement was necessary because the roof had reached the end of its functional lifespan. The old roof was the original Johnson Center roof. The building first opened in 1995, putting the roof at 20 years old.

As the roof got older, various problems were occurring as a result of the roof being worn out. Chris Brown, acting associate director of Building Services, said holes were starting to appear, which had caused some damage to the building’s interior.

“[The roof] had a lot of holes. It was just kind of worn out,” Brown said. “Roofs typically have about a 20 year lifespan, and we were pushing a few more years than that with this roof. So it was just time for it to be replaced and get rid of those holes that just kind of show up over time.”

Morehouse said that most of the roof-related damages inside the Johnson Center are cosmetic issues, like water-stained walls. He said Student Centers has plans to repair the interior, but that it is a separate project from the roof replacement and will begin at a later time.

Once the entire roof replacement is said-and-done, Morehouse said the cost of the project will be nearly $2 million.

He said the project has gone smoothly, given the usually packed Johnson Center.

“It’s actually gone pretty well concerning how intrusive of a project it could have been,” Morehouse said.

On Sep. 16, the Mason community received an email from Parking and Transportation that provided details of current and upcoming road closures around the north side of campus.

The closures are due to the ongoing construction of Academic VII on what was previously Lot H. Academic VII will be a new building for the College of Health and Human Services (CHHS). Construction is scheduled to be completed July 2017, according to the facilities website.

Josh Cantor, director of Parking and Transportation, said Patriot Circle is being rebuilt to accommodate the future CHHS building. In order to do so, the road is being rebuilt slightly south of its current location in that area. Then, nearby and attached auxiliary roads will be realigned to fit in with the new Patriot Circle.

Cantor said students, faculty and staff can expect road closures and detours around the construction site to last throughout the academic year. Cantor explained, as did the email to the wider community, that the specific closures and detours will change periodically. He said the road construction is divided into five phases. The first two will take place this semester.

Currently, road construction is still in Phase One. During this rest of this phase, the portion of Patriot Circle located between George Mason Boulevard and Occoquan River lane will remain closed, as will the section of Aquia Creek Lane that connects Patriot Circle to the area behind Thompson Hall.

Phase Two is scheduled to begin in early November and last throughout most of December. In this phase, the aforementioned section of Aquia Creek Lane will reopen, providing a detour of Patriot Circle construction. The part of Occoquan River Lane between Rogers Hall and Subway will close, as will the Lot I entrance off of Aquia Creek Lane.

Cantor said Parking and Transportation will provide the Mason community with details about the later phases closer to each one’s initiation. Information on the first two phases, including maps that illustrate the road closures, can be viewed on the site building.gmu.edu.

Plans for Academic VII began about six years ago, according to Cantor, and since then Parking and Transportation has been preparing for the loss of Lot H. For example, Rappahannock parking deck was built to absorb some of the lost parking space, Cantor said.

He explained that even with the loss of Lot H, there is still enough parking to meet demand. According to Cantor, recent buildings like Merten Hall and the engineering building were also built on parking lots, since they make attractive building sites.