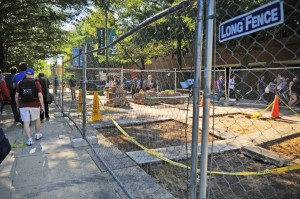 Facilities announced via email at 1:11pm that air conditioning is not working in the following buildings: the Johnson Center, David King Hall, Robinson A and B, Krug Hall, Finley Building, the East and West Buildings, Sub I, and Aquia.

The breakdown was attributed to a break in a chilled waterline that runs between the clock tower and the Johnson Center. This area in North Plaza is now an “emergency construction site,” according to an email Thomas Calhoun, Vice President of Facilities, sent to the Mason community.

Frank Strike, Director of Facilities Management, said repairing the waterline will likely take three to four days. Workers need to dig 12 to 15 in order to fix the line, so Strike said great care for safety is necessary.

In the meantime, Strike said 40 spot coolers have been rented and placed throughout campus buildings in an effort to keep classrooms cool.

Calhoun’s email said all classes and events will be held as scheduled, except for events scheduled in North Plaza, which will be relocated. Strike said an inter-departmental emergency operating group has been created and will continuously monitor conditions in rooms without air conditioning. He said the group is prepared to move a class or bring in extra coolers if necessary.

The email also said higher temperatures could affect telecommunications and wireless networks. However, Strike said this is now unlikely because spa coolers have been placed in the the IT rooms, keeping the temperature in a range where everything can function as normal.

If you have concerns about the temperature in your building, Calhoun said to contact facilities management at 703-993-2525 and stay on the line until someone answers.