Student organizations at Mason serve a variety of great purposes for students. Some clubs and groups help students form networks of friends and acquaintances in an unfamiliar environment. Others might hone students’ practical talents and skills to prepare them for entering the workforce. Of course, a few clubs simply offer a place to spend time in a friendly atmosphere. Few organizations offer all of these listed qualities – as well as a firm policy of inclusivity – the way the Music Productions Club (MPC) does, though. 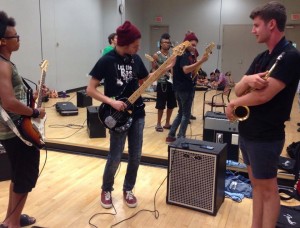 “Music Productions Club formed in 2010 as a means for students outside of a music major to practice their craft in a campus environment,” said Caroline Weinroth, the first female president in the club’s history.

In its early years, the club mostly consisted of occasional ‘jam sessions.’ Members would join together, network among themselves, form bands and practice their instruments. This formula was fairly effective – at least for those who thrived in that sort of environment.

Weinroth, a guitarist and singer/songwriter for the local band Cinema Hearts, expressed how club operations generally left newer and younger members out of the loop.

“I joined my sophomore year,” she said. “I was just learning how to play the guitar, so I couldn’t exactly join in on the other members’ jam sessions. There wasn’t a whole lot for me to really do. There was this sense of exclusivity in the club, and that’s something I hope to change.”

“We’re trying to draw anyone who’s interested in music,” said Weinroth, “not just musicians. That means anyone with interests in the business side of music, how to set up and run shows, how to work sound equipment, and even just talking about their favorite artists.  We plan on putting on workshops for anyone who’s interested, especially those who don’t play instruments. We want to start to cultivate and capitalize on this built-in underground scene available at Mason.”

Interest in the club has peaked among younger students, and the shift towards building a positive community is boosting the spirits of even longtime club members.

“I know MPC is helping musicians meet more musicians,” said returning member Sam Smith. “I went to a jam session, and I was instantly greeted and began playing my saxophone with a bass player and a couple guitar players. It definitely brings people together.”

Through collaboration with other clubs and organizations, as well as a revamped and well-utilized social media presence, the Music Productions Club is rapidly growing its member base. The necessary hard work to keep an organization thriving is cut out for the club, but the results are already promising.

“One thing I expect from the club this semester as opposed to previous semesters is the greater number of individuals that will come out to meetings and events,” said Kevin Engle, the club’s vice president. “The first open mic the organization had [this semester] during the first week back was probably one of the largest turn outs we’ve had for an MPC event in the longest time.”

Another goal the club works towards is less Mason-centric: integration with the surrounding music scenes of Fairfax, Northern Virginia and D.C. While the club mainly attempts to foster a healthy and friendly music scene on campus, its events and shows are designed to bring the feel of a D.C. show to Mason.

“My favorite aspect of the club is that it gives students a place to jam and the ability for students to perform with shows,” said Engle. “We are able to bring the shows to the students here on campus instead of having to travel into D.C.”

The shows lined up for the semester are designed to not only give students a glimpse of the surrounding music scene, but also to present George Mason and Fairfax as a legitimate location for music communities to thrive.

“I really think it’s important for school pride to accompany this scene,” said Weinroth. “We’ve got an event coming up with The Duskwhales performing, and they’re a Mason-based band with a really great following. The idea is that we’ll have students come out to these shows, or even just pass through by chance, and they’ll see this very real scene. This is what a show is like! And on top of it all, this is a Mason event! That’s something worth having pride in.”

For all its plans and the lofty goals, MPC remains an organization based solely around the people it welcomes. New members tend to stick around for more than just the occasional meeting, and truly wonderful experiences take shape.

“MPC has definitely affected my life in a positive way,” said Engle. “[A] positive aspect of the club [is] the individuals I have met in the club, many of whom I have become close friends with here on campus.”

Now with a growing member base and increasing interest, the club can focus its efforts on expanding. A championing point of the process is the effort to create a fully inclusive space for all potential members.

Weinroth certainly understands the necessity of establishing a safe and positive environment for students.

“As [p]resident,” she said, “I can’t stress enough that I want this to be an all-inclusive, safe space. The best music environments I’ve been around are progressive and conscious of their members and atmosphere. I don’t want this organization to be an exclusive club for guys who already know each other. I want this to be a community.”

MPC is not a group pulled together purely through self-interest.  It provides something simple for musicians and music fans on campus: a space to come together, talk about music, write songs, form bands and make friends.

Weekly Meetings: Fridays from 1:30 to 4 p.m. in the JC Dance Studio

Weekly Open Mics: Thursdays from 7 to 9 p.m. in the Side Pocket

September 28: The Duskwhales (GMU), T-Rock (GMU), and Funeral Advantage (Touring from Boston) at 7:30 p.m. in the Side Pocket

Air conditioning down in 10 buildings