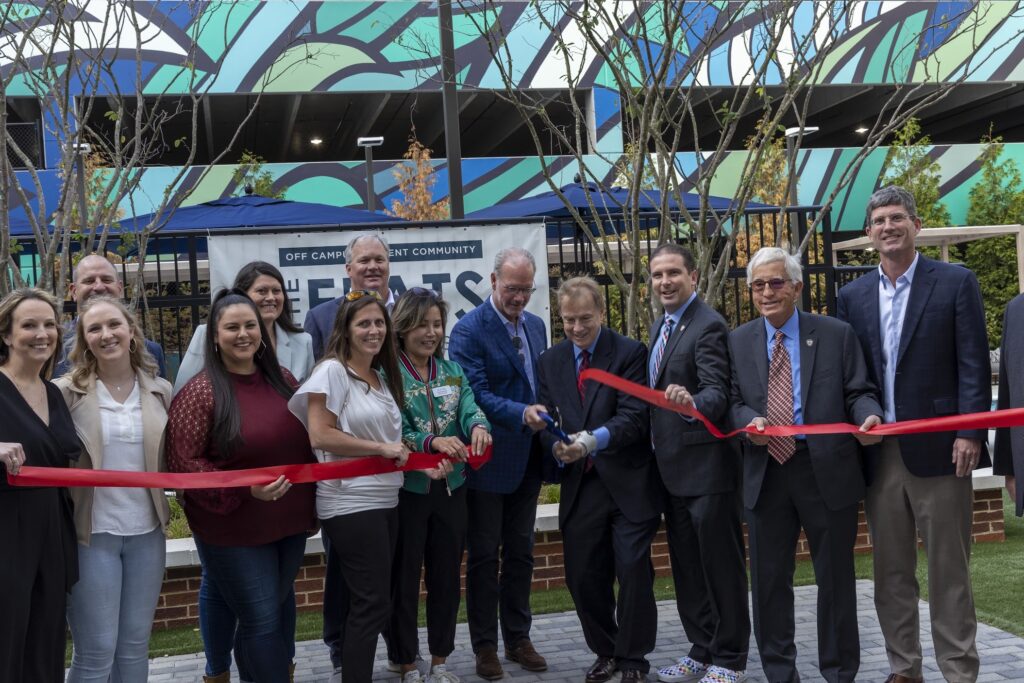 As the newest apartment complex hits the streets of Fairfax for Mason students, many promising opportunities lie ahead for building a sense of community in the area.

The Flats on University was just a mere construction project that Fairfax citizens and Mason students witnessed in the early months of last year, as the blueprints were still being made. As of Aug. 19th, the apartment complex has been open to the public for leasing. The Flats is one of the first off-campus communities curated for students who attend George Mason University.

The complex allows residents to live in “affordable luxury” with heated resort-style pools, furnished study rooms, a 24 hour fitness center, and a 24 hour clubhouse. “It offers the best amenities you can find in student apartments in Fairfax, VA”, according to their website.

In addition, the official website for The Flats allows residents, students or non-students, to create a portal for their lease. Also, there is a tab labeled ‘International Students’ which includes more information on frequently asked questions that are designated for that demographic. 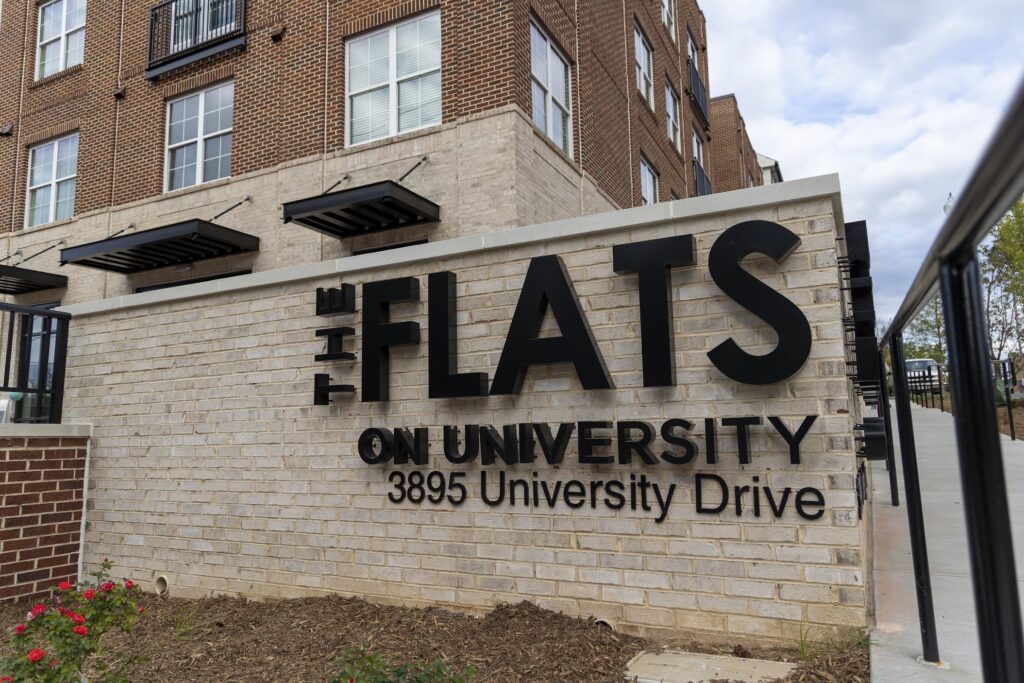 In addition, The Flats have created a new security tactic for their residents called ‘key fobs’, a small, air-tag device that can be tapped against the doors of the building to enter and exit.

The Flats on University is currently being rated 4.1 out of 5 stars on Google Reviews for its overall services, amenities and living situations for residents. The recent fixture of its security protocols creates a positive turnaround for the safety of the environment.

This past Thursday, The Flats on University held its first ribbon cutting ceremony to honor the start of the Fall 2022 leasing quarter. Residents and officials who lived in the apartment complex were more than welcome to attend the ceremony.

City officials and local business leaders were in attendance to celebrate the opening of The Flats. Many shared their remarks through speeches and thank-yous.

Jennifer Rose, who is the Executive Director of the Central Fairfax Chain of Commerce started off the ceremony by stating how thrilled the team was to finally have the apartment complex open.

“We are so thrilled to be here and so excited to be here for the opening. Things have definitely changed since I was in the off-campus student housing market since I was a student many, many years ago!” Rose commented.

In addition, Amanda Wallace, who is a member of Capstone Communities, spoke about the copious amounts of time and dedication that was put into the construction of The Flats.

“I’ve reflected a lot on the past six through seven years we’ve been on this project. If you had asked me six years ago about this, I would’ve said this would have been an impossible task” she mentioned. “It felt impossible but we had some wonderful support from our advisors at Capstone. Looking back at the process and the 175 neighborhood meetings we attended, we were up for the challenge and that is the reason we are here today.”

The Flats on University construction was delayed in early 2020 due to COVID. Due to this, advisors of Capstone Communities had to hold off on financing, which made the anxiety creep up for the team.

“Our partners were wonderful throughout the entire process. Every single day there were challenges. Fast forward to this year, we moved almost 825 people in one day. It was incredibly successful and today, we are 100% full. We do not have one single vacant bed.” Wallace exclaimed. 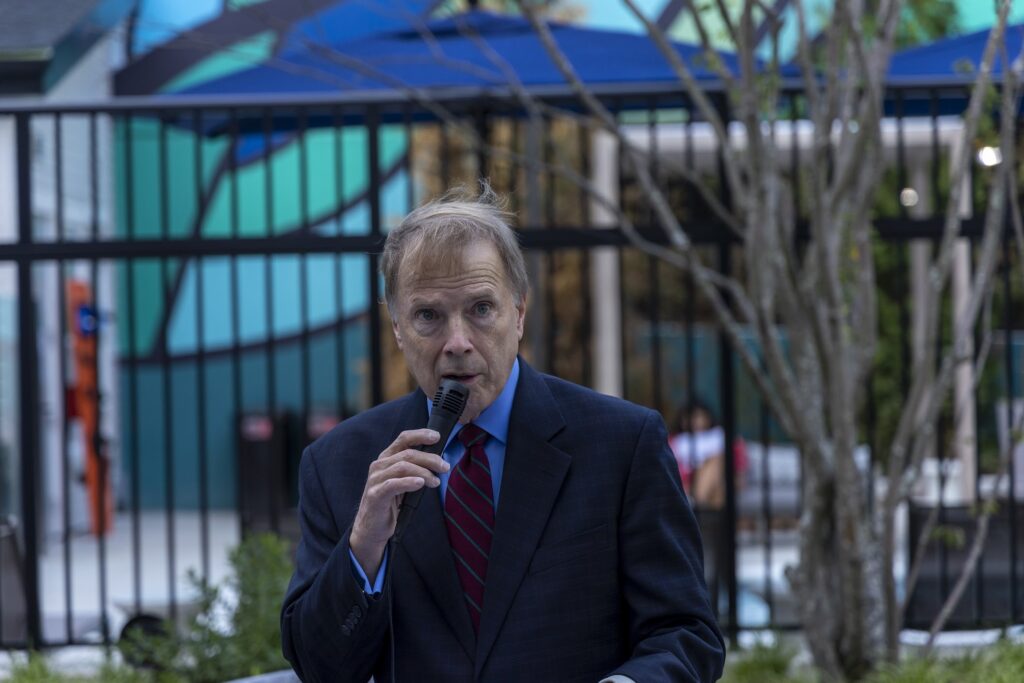 As well, Fairfax Mayor David Meyer was in attendance and shared his remarks on The Flats and the journey the team had been through to make this project happen.

“Today is the culmination of an initial conversation over five years ago with my team. To bring a project like this under five years doesn’t happen overnight,” Meyer said. “Capstone came to Fairfax and immediately saw the potential for a high-quality student housing adjacent to George Mason University.”

The original floor plans that were drafted before construction was shown to guests to commemorate the amount of detail that was put into the design of the building.

Mayor Meyer gave more insight into the impact of the facility’s location.

“It’s our hope and our intention that this project will be the catalyst to the redevelopments that are happening downtown. We want to create a stronger tie between the Fairfax downtown and Mason’s campus,” he explained.