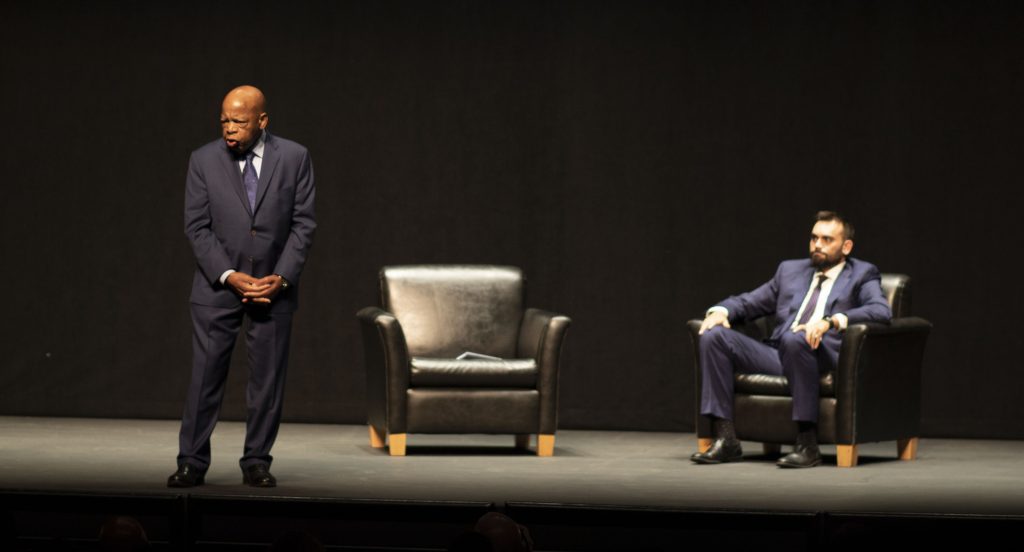 The renaming of Robert E. Lee High School in Springfield, Va. comes during a racial reckoning in America. And that change came to a town in northern Virginia over the summer — a place less than 20 minutes away from Mason’s Fairfax campus. On July 23, the Fairfax County School Board voted unanimously to rename Lee High School to John R. Lewis High School after Georgia Democratic Rep. John Lewis, just six days after his death.

While changes are being called for on a systemic level, the removal of Confederate flags, statues and name changes — such as the one occurring at  Lewis High School — are symbolic of the shifts happening in everyday life.

Lewis was known for his triumphs during the civil rights era. Heralded as one of the heroes of the civil rights movement, Lewis was the last living speaker from the famous 1963 March on Washington. He received the Presidential Medal of Freedom in 2011.

After the death of George Floyd in May, protests against police brutality arose across the U.S., and demonstrations for the Black Lives Matter movement intensified — and are still happening in places such as Portland, Ore. and Louisville, Ky.  — in all 50 states and some countries around the world. Floyd’s death sparked an ongoing conversation about race and power in America.

Amanda Hurst, junior class president at Lewis High School, noted the Confederacy has been normalized in the U.S. — and at her school.

“Robert E. Lee’s name was so normalized as being our school’s name … It was just so normalized to the point where we still had his portrait up in our main lobby. The same doors that we walked in and out of every day — there was this glorified portrait of him.

Junior Edward Carino believes that this time of social unrest is why the name change finally happened.

“The Black Lives Matter movement really put pressure on the school board members to actually do something about our name change, which is unfortunate, but it’s what happened,” Carino said. “The name change is a new chapter at the school, it’s a clean slate. Whatever happened in the past, that’s just history now. Now we get to write the history of John Lewis High School. And that’s what we’re trying to do: honor his legacy to the best we can.”

The school board “held a one-month period of public comment on possible new names. A virtual town hall meeting was held July 15 and a public hearing was held July 22,” according to a news release from Fairfax County Public Schools.

“The name Robert E. Lee is forever connected to the Confederacy, and Confederate values are ones that do not align with our community,” Derenak Kaufax said. “Our schools must be places where all students, staff and members of the community feel safe and supported. I believe that John Lewis’ extraordinary life and advocacy for racial justice will serve as an inspiration to our students and community for generations to come.”

The renaming caught the attention of national news outlets, including CNN, Axios, USA Today and The New York Times. The name change also gained significant traction on social media. On the day of the announcement, Franklin Leonard — contributing editor at Vanity Fair and founder of The Black List, an organization that connects writers, filmmakers and film lovers — tweeted, “Imagine the pride you’d feel going to John Lewis High School.”

Pride is exactly what students at Lewis High School felt upon hearing the news.

“I was very excited, because I know a lot of the people that I was around in the class office [were] really fighting for this name — for it to be changed,” said Siham Niori, a junior. “And when it was finally changed to someone that was respectable, and that really, really wanted the best for people, I was so excited because he is being honored. And I feel like our school is — because Lee was a great school, but I feel like with the new name … it’s just gonna make our school better, because I feel like everyone’s more together, and it’s just more united.”

This pride is a new sentiment for students who struggled with the old name. Carino, an athlete on the track team, said that students were ashamed to say what high school they went to at athletic events. Hurst added that students would cheer for the Lancers, the school mascot, rather than for Lee.

Lewis High School is located in FCPS, the tenth largest school division in the U.S. Lewis High School is home to an array of students from ethnically diverse backgrounds. According to data from the 2019-2020 academic year, 23.94 percent of students are Asian, 12.97 percent Black, 45.46 percent Hispanic or Latino and 14.93 percent white. Students also “speak 25 different languages and represent over 61 countries,” according to its website.

“I think — because the high school is a majority minority high school — the main sentiment among most people was that the previous name [Robert E. Lee] wasn’t reflective of the student body,” said Basma Humadi, a 2015 graduate of Lewis High School.

She continued, “Now, I think when people think of the name Robert E. Lee, it’s like, almost immediately associated with white supremacy or this idea of Confederate pride. But I think that the name has always been problematic.”

This name change also comes during the midst of a global pandemic. Students at Lewis High School — and all those in FCPS — began their all-virtual classes on Sept. 8. It is unknown when they will start hybrid or fully in-person learning.

“Obviously we’re still proud to have our name changed after John R. Lewis,” said Rawan Hashim, a junior. “But I was really looking forward to going back to school and celebrating [this] instead of celebrating it virtually and actually seeing all the changes around the school – and having that portrait of Robert E. Lee taken down.”

Principal Alfonso Smith, who has only been the principal of Lewis High School since January, is proud to see his students advocate for change.

“So there’s a joy for me in knowing that there’s a pride that comes with representing our name and even the individual who … our school is named after. Some of the parallels with his life and the things that he advocated for — I hear teenagers in our school that are advocating for the same kind of things. For me it was very fulfilling just to see that,” Smith explained.

Smith added that while every change might not happen overnight, things are changing step-by-step. He believes many of the changes that need to be put in place, such as replacing signage, will be there by the time students come back to the classroom.