Across the United States, gas prices have steadily been on the rise, with the average price of gas doubling in the last ten years. According to Statistica, a gallon of gas cost an average of $1.48 in the year 2000. In 2021, the average price rose to $3.01.

However, in 2022, gas prices have risen rapidly after late February. In March 2022, consumers saw a record-breaking average high of $4.33 per gallon in America. The cost is so high, that there have been cases of people rigging gas pumps down to the price of pennies so that citizens may afford to fill their tanks. 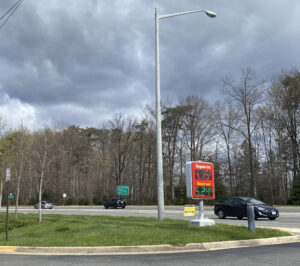 The extreme rise in prices is due to a collection of events. On the morning of February 24th, Russia made the decision to invade Ukraine and which has resulted in the loss of civilian lives.

In response, President Joe Biden cut off all Russian gas imports. Russia accounts for 8% of all imported oil to the United States and 2% of the gas supply in the United States. As a consequence of this, many gas companies raised their prices dramatically in the past weeks causing a major strain for Americans.

Fairfax County has a high cost of living, ranking the fifth most expensive in the country. As of April 5th, Fairfax has the highest gas prices in the state of Virginia with an average of $4.28 per gallon according to AAA.

As a result, students and professors of Mason are feeling the effects of the gas price raises.

Freshman Grace Moon is a commuter at Mason who notes a financial strain on her following the rise in gas prices. “The rising gas prices has made a pretty big impact….on my wallet,” said Moon.

“I commute from pretty far, around 40 minutes so gas has always been a big expense for me, but with the gas prices rising over 4 dollars per gallon, I’ve noticed my paycheck being spent much faster. I found myself not wanting to drive anywhere besides class and work. Along with just prices, in general, rising across the board, it’s been leading to more financial stress.”

More than 200 Mason students have moved to sign a petition that would motion for Mason to implement hybrid learning for commuters until the gas prices go back down.

The author of the petition, junior Paris Fouser, made the petition because commuters are spending too much of their money on gas, “​​I created the position for classes to be made optionally hybrid because I’m spending $55-75 dollars of gas when I refill my tank, and I’m refilling it every three day” said Fouser. “That’s a lot of my paycheck going straight to my tank, and I’m not making enough working part-time to fund my tank and afford paying for other finances.”

Dr. Lisa Breglia is a professor at George Mason who teaches Global Affairs. She is also the Senior Associate Dean of Undergraduate Academic Affairs in the College of Humanities and Social Sciences.

Dr. Breglia spoke about how students and teachers are being impacted at Mason, “Those who are already in economically vulnerable positions, like many of our students and workers across the Mason community are especially impacted by rising prices,” said Dr. Breglia.

MASON VISION DAY RAISES OVER $130,000 FOR THE GREEN MACHINE