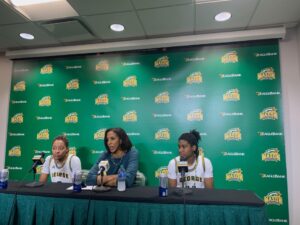 Mason’s women’s basketball team had an impressive win at EagleBank Arena against the Florida Gators on Wednesday with a final score of 75-71. This pushes the Patriots to 6-3 in non-conference play under new head coach Vanessa Blair-Lewis.

Mason notched its third straight win, and first at home this season, after sweeping the Navy Classic in Annapolis last weekend.

This was Mason’s first win against a Southeastern Conference opponent since 1996, when Mason beat Auburn in overtime, 56-55. This was Mason’s second meeting with Florida and the first since 1989.

Senior Amaya Scott led the team, tying her career-high of 25 points earlier this season. Fifteen of those came in the first half.

Scott entered the press conference smiling from ear to ear.

“I just want to thank all of the fans that came out, it really means a lot to us to have all that support,” said Scott. She ended the press conference by screaming ,“Get Patriotic!”

Junior Tamia Lawhorne also had a great game, with a season-best of 19 points, along with four three-pointers. She talked about what it means for Mason to get this kind of win and double their win total already from last season.

“I mean, it means everything coming off a season from last year, only winning three games early in the season and not winning again,” said Lawhorne.

Lawhorne stressed the change in mentality and resetting this year as well.

“Now, we’re just trying to change that mentality we have from last year, coming in here knowing that we’re not the same team that we were last year, we’re different,” Lawthorne said. “We have a great coaching staff, we have great players, we have people who want to work hard every day, get in the gym and do what has to be done on the other side of it.”

In her first season as head coach, Blair-Lewis has already made significant accomplishments in just her first nine games.

Mason is now 5-0 in games decided by five points or less, and has claimed their first overtime win since 2017 against Bowling Green.

Despite these accomplishments, Blair-Lewis remained focused on turning the page and continuing the success after tonight.

“Well I think what we do as a team and what we’ve done as a coaching staff is that the second you take that shower that next day or that night, you turn the page. This one [win] means nothing if we drop anything else, we’re here to win games in the A-10 conference,” said Blair-Lewis.

Mason continues December play at home with a 7 p.m. contest against Norfolk State on Monday, Dec. 6 at EagleBank Arena.