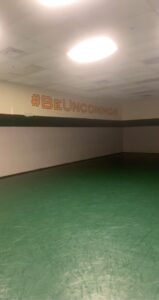 Mason athletics has officially made its transition to winter sports. Mason’s wrestling program made its 2021 debut as of Friday, Oct. 29 where the Patriots hosted the “wrestle-offs.”

The wrestle-offs were not a normal meet, according to head coach Frank Beasley. This is viewed as a follow-up or check-in meet where the athletes compete against each other, strictly within the team, as a useful strategy for kicking off the season to evaluate where the performance of the team is.

“This is basically an intersquad meet. It helps us determine our starting lineup. There are ten weight classes that the student athletes can compete in. So, everyone that is competing at 165 pounds, for example, will wrestle to determine the starter,” Beasley stated. “No other teams are involved. Not everyone on our team competes, as some are already determined to be redshirting, are injured, or do not have someone challenging them for the starting position.”

Another unique aspect about this particular event was that the athletes had the opportunity to earn what’s called the Medalist Honors.

With competition underway, these athletes are realizing there is a lot on their shoulders. Given their individual goals for the season, they are pressed to get the results they are hoping for.

“There are definitely some of our student athletes that deal with anxiety,” Beasley explained. “We are sensitive to that and want to work with them to help alleviate anxiety. We focus on improvement and effort, not on the final results. I think this helps us get the results that we want.”

This group of individuals are passionate about what they do and eager to get going with the season.

“The student athletes are very excited. The Southeast Open raised some eyebrows across the country. We had five champions at the tournament. In my previous four seasons, we had a total of one champion,” Beasley said. “The really exciting thing about this is that there is a youth movement in our program. Currently, we have one senior, one junior, one sophomore and seven freshmen in our lineup. The future is bright in Fairfax! I think we are going to surprise a lot of people this year.”