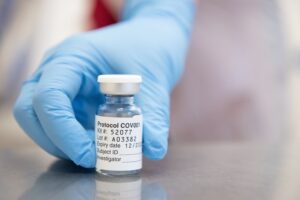 On Aug. 3, the New Civil Liberties Alliance (NCLA) filed a complaint with the U.S. District Court for the Eastern District of Virginia on behalf of Todd J. Zywicki, a foundation professor of law at Mason’s Antonin Scalia School of Law.

The suit was based on GMU’s vaccination policy, which “requires all unvaccinated faculty and staff members, including those who can demonstrate naturally-acquired immunity through recovery from a prior COVID-19 infection, to disclose their vaccination status as ‘a prerequisite for eligibility for any merit pay increases.”

Zywicki received a medical exemption. However, many questions were left unanswered. I recently met with Zywicki who was kind enough to shed some light on the situation.

The first thing that ought to be made clear is that despite what many have claimed, Zywicki is not “anti-vax.” In March of 2020, he contracted COVID-19 and says himself that, “If there had been a vaccine around then, I would have gotten the vaccine.”

On top of this, Zywicki volunteered and was allowed to teach on campus last fall. He said this was because he felt he “owed it to my students and to the school.” During this time, he took multiple antibody tests, each one coming back positive. For all intents and purposes, Zywicki’s natural immunity made him as safe as one could be, which is why he took issue when Mason announced that they would be requiring all students, faculty and staff to get vaccinated regardless of their immunity status.

Zywicki began doing research on vaccines (in part due to a nasty bout of shingles) and, based on that, felt that those who have previously developed antibodies for COVID-19 were much more likely to experience severe adverse side effects.

Given that receiving a COVID vaccine could potentially harm him or anyone else who is naturally immune while also providing little to no benefit, Zywicki contacted those who were designing Mason’s COVID policies. This did little good however as Zywicki reports, “They basically said nothing and that natural immunity is worthless.”

Following this interaction, or lack thereof, Zywicki decided to contact his lawyers and send a private letter to Mason. Zywicki provided them with studies as well as an affidavit from his immunologist — and if this wasn’t enough, Zywicki also provided affidavits from Jay Bhattacharya and Martin Kulldorff (two leading experts on public health).

Despite this, Zywicki’s protest seemed to fall on deaf ears.

“Instead of responding to our private letter, they just issued a policy the next day and then basically gave us a brush off afterwards saying we don’t believe in natural immunity,” Zywicki said.

Following the release of the vaccination policy, Zywicki sought a medical exemption, and said he received it “in part due to the high risk that it would reinflame my shingles.” It should be noted that this is not an excuse afforded to all at Mason as natural immunity is still not a valid medical reason for exemption according to their vaccination policies. In addition to this, Zywicki will be forced to get tested for COVID every week as if he had no immunity whatsoever.

Regardless of the strained relationship between the administration and himself, Zywicki has said he is “fortunate to have to been blessed with such good colleagues here in the law school” and that “ny colleagues have been completely supportive and the reason is that people at this law school, faculty and students, believe in rigorous analysis and data.”

Zywicki could not say the same for the rest of the university, which he argues “seem to just want to follow the herd,” rather than to think for themselves. Zywicki is right — there seems to be a kind of cognitive dissonance that is being ignored when it comes to COVID-19 and Zywicki has responded to its greatest discordance in the statement, “It’s time to stop obsessing over vaccinations, and instead start thinking about immunity.”

Even if one were to disagree and argue that there is a moral responsibility to get vaccinated regardless of immunity status, the crux of Zywicki’s argument is the fact that Mason is a state institution.

“Even if the state has some legitimate interest in making sure people have some degree of protection against the spread of contagious disease, whether it is sufficient in this case to compel people to sacrifice their bodily autonomy for an involuntary medical procedure is a different question,” Zywicki said.

He adds that, even if there were sufficient conditions to require immunization, “there’s no reasonable basis for favoring artificial immunity over naturally acquired immunity when the evidence is so clear that natural immunity is at least as protective as the most protective vaccines and clearly more protective than mediocre vaccines, like Johnson & Johnson.”

Zywicki also adds that, “It’s not even close between natural immunity and some of the laughable vaccines that Mason’s policy recognizes, such as sinovac and sinopharm.”

Shockingly, Mason recognizes any vaccine approved by the World Health Organization (WHO) regardless of effectiveness and the hypocrisy is all too apparent especially given what the WHO says about these vaccines and natural immunity.

This already hazy legal situation has been complicated by the Biden administration’s recent executive order which will, among other things, require all employers with 100 or more employees to force their workers to either vaccinate or provide a weekly negative COVID test.

“It’s vicious and it’s unconstitutional. It’s not something that can be done by the president unilaterally. It’s not something that the federal government can do because the federal government does not have the power to centrally enforce vaccine mandates directly or indirectly on private employers and even if they did have the power to do it, they don’t have the right to do it, and they certainly don’t have the right to do it to those of us who have natural immunity,” Zywicki said. “I have a right to bodily integrity and you can only compel me to undergo medical procedures if you have a compelling reason to do it. Here, there is no compelling reason.”

This is the issue that we all will have to reckon with: Zywicki is right. In a state of panic, we have arbitrarily taken away the bodily autonomy of our own citizens. This sacrifice of liberty will do little to protect us as a whole and it does not matter how harmless the vaccine is, a power grab is a power grab.

COMBAT ON THE MAT