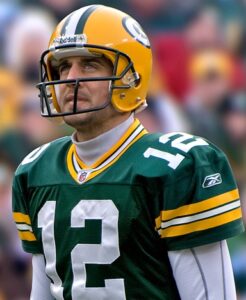 Green Bay Packers quarterback Aaron Rodgers tested positive for COVID-19 on Nov. 3, and was ruled ineligible to play against the Kansas City Chiefs, according to The New York Times. Rodgers has to sit out for at least ten days and test negative twice before playing against the Seattle Seahawks this Sunday.

The NFL has not mandated COVID-19 vaccines to their players but has strongly encouraged them, according to the protocols.

The quarterback was fined $14,650 —  along with Packers wide receiver Allen Lazard — while the team was fined $300,000 as a whole, according to the NFL. Multiple Packers players were spotted at a Halloween party on social media, including Rodgers, who were all not wearing masks, the NFL reported.

Junior Paige La thought that being vaccinated should be required for NFL players.

“I just think it should be a requirement that all the players get vaccinated,” said La. “Like no exceptions, no matter what, and if you don’t, then you can’t play or practice.”

La, a member of the Mason women’s tennis team, emphasized that the risk was too high to not compete in athletic play.

“Why risk getting COVID-19 and not being able to play? Does [Rodgers] think the vaccine doesn’t have enough research?” La asked. “It shows that even pro athletes and large public figures can be really irresponsible.

Another student, sophomore Megan Connelly, built upon La’s comments, “As a professional athlete and team member, Aaron Rodgers was obligated to be honest about his vaccination status.” said Connelly.

“First off, I never want to comment on if someone should, or shouldn’t be vaccinated, and I want to stay away from that conversation entirely,” said Charles. “I think that’s a personal decision.”

Charles, a member of the Mason men’s tennis team, stressed about what you are signing up for as an athlete but criticized the NFL’s handling of the situation.

“I think what people are missing here is as an athlete, you always report to a governing body, whether it’s college athletes to the NCAA or football players to the NFL,” Charles said. “That being said, the NFL knew about his status, and still let it go this far publicly, yet no discussion has been put on them.”

As an athlete, Charles did not have faith in the organizations representing him or Rodgers.

“As an NCAA athlete, I always feel the NCAA will throw me under the bus to protect themselves and you just saw the NFL do the same,” said Charles. “As an athlete, my opinion is the organization or governing body will let a player or team suffer to make sure they don’t get the negative press.”

COMBAT ON THE MAT

THE TRAGEDY AT ASTROWORLD