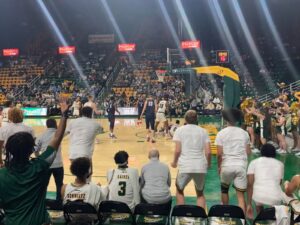 At 3 p.m. on Friday, Nov. 12 in Lot A of EagleBank Arena, a tailgate kicked off the beginning of the annual Gold Rush event. Featuring free shirts, games, contests and even a mechanical bull, the tailgate got students into the spirit for the men’s basketball game that evening.

Alayah McIntosh, the president of the Patriots Activities Council (PAC), has been working for Gold Rush since 2019, along with PAC member Carter Knapp.

According to both McIntosh and Knapp, a large amount of planning goes on behind the scenes when it comes to Gold Rush.

“First starting off, planning activities such as the mechanical bull outside, passing out t-shirts, and having more games inside [the arena], then having to pick out a t-shirt design, once doing that, forming logistics,” McIntosh elaborated.

While the two PAC members only have been working Gold Rush instead of fully attending the event themselves, McIntosh does mention that she “definitely enjoys [working]” and that “working the event helps [her] have a little bit more Mason spirit.”

Before the doors opened, students, alumni and families were lined up outside waiting to see the game. After a 74-52 win against the Stony Brook Seawolves on Tuesday, Nov. 9, there were high hopes for another win for Friday night.

Seats filled up quickly, especially in the student section. From top to bottom, open seats were scarce as students came to support the men’s basketball team. Some students were left sitting on the stairs and standing at the railings, anticipating the start of the game.

The men’s team did not disappoint. Starting off strong within the first three minutes of the game, the Patriots scored four points back to back against the Penn Quakers. By halftime, Mason was up by 16 points with a score of 43-27.

As the game continued into the second half, the men’s team kept the energy up. Following the six three-pointers in the first half, five more were made in the second half. One of the five was by Jamal Hartwell II, unassisted.

By the end of the second half of the game, Mason rose up by 44 points, compared to Penn only rising up by 39 points. As the final minute counted down, the score was settled to 87-66 and made this the second win of the season for the Patriots, letting the crowd know to rock with the team this season.