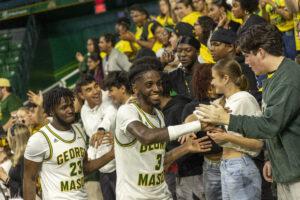 As students rushed into EagleBank Arena for the annual Gold Rush event, enthusiasm and school spirit filled the atmosphere leading into the first home game and win of the season.

Another year and another win for Mason’s Men’s Basketball home opener! Kicking off the first home game for the 2022-2023 season at EagleBank Arena with a slam dunk and a buzzer beater; Patriot Pride filled the stadium throughout the night the moment doors opened at 5:30 p.m. for the annual Gold Rush event.

Despite the rain and the cancellation of the Gold Rush tailgate, free student tickets were completely sold out by the time the event started. For those who secured their tickets, found themselves rushing around full of excitement the moment they walked through the doors.

Through this rush of getting indoors and the close-knit-togetherness of the Mason community all in one place, several students noticed the high amounts of enthusiasm and school spirit that filled the arena leading up to the home opener.

Darren Miralles, a Senior at Mason, felt the high levels of enthusiasm and school spirit that surrounded his first-ever Gold Rush experience. “When I first walked in, I was immediately greeted by student staff to claim a free t-shirt with my Mason ID! While I didn’t use the photo booth, they offered free Patriot Pride Signs… as well as GMU stickers during the game.” said Miralles.

Miralles also mentioned, “[Gold Rush] was overall, a wonderful experience and [made him] want to go again!”

Junior Patrick Bereit, agreed with Miralles in terms of enthusiasm and school spirit. “I had never seen such school spirit,” said Bereit. In addition, Bereit also stated that this event and the school spirit which surrounded it, “Truly made [him] proud to be a Patriot.”

Similar to Miralles, this was also Bereit’s first Gold Rush. Despite not attending in the past, Bereit’s overall impression of the Gold Rush event of this year compared to past events was that “[The event] compared great!”

With Bereit, was senior Aleena Fernandez. Fernandez shared that Gold Rush and the basketball game following was her first game ever, “I honestly didn’t expect much in terms of Mason’s school spirit and enthusiasm, but when I first walked in, I was pleasantly and genuinely surprised,” Fernandez said.

Fernandez described the event as an overall fun time, “There were a lot of tables with nice activities… I was greeted nicely and pointed to where I could get my shirt for the game.”

While there, she also mentioned that she and a friend “ended up getting gold room tickets from someone who was not going to use them… and had a great free dinner before the game.” By attending Gold Rush, Fernandez was able to have an enjoyable first basketball game experience, getting her into the spirit of the game.

The spirited atmosphere that was gathered through the activities of the events, from face painting, free shirts, giant signs and the hyped-up songs from the Green Machine, remained throughout the game and afterward.

Patriot pride was ultimately the theme of the night, as celebration followed the game with the first win of the season. Thus marking, this annual event of Gold Rush a success and leading towards a much anticipated Homecoming later on in the season.