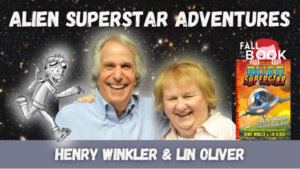 The final live event for Fall for the Book Festival was with none other than Henry Winkler and Lin Oliver. The event went live on Crowdcast on Friday Oct. 29 with moderator Ron Charles, book critic for the Washington Post.

Charles began the event by introducing the co-authors and listing their accomplishments.

“Alien Superstar” follows protagonist Buddy Burger, who has escaped his repressed planet and ends up on Earth in the backlot of Universal Studios.

“Who is gonna question a rocket ship on the backlot of Universal Studios?” Winkler jokingly asked.

Burger ends up being cast on a situational comedy show and becomes a hit, but Burger’s adventure really begins the leader of his planet comes looking for him.

Winkler and Oliver delivered a bubbly and funny presentation about their early life, the beginning of their careers, and how they met and collaborated to write children’s books together.

Winkler, on the other hand, faced some challenges.

“Everybody said I was stupid, lazy, not living up to your potential and I had a dream while I was lying in my bed, on the west side of New York, to be an actor. I never let the dream out of my mind and I always kept it front and center,” Winkler said about his career.

During a lull period in Winkler’s acting career, his friend suggested he write children’s books about his learning challenges and Winkler says he told them, “I have a learning challenge, I can’t write a book!”

His friend then introduced the pair, since Oliver has so much experience writing children’s literature. From just one meeting, they decided to write children’s books together.

Oliver explained their goals, saying, “We are hoping to hear you laughing, we would hope that if you’re reading this tucked in your bed at night, or if you’re reading it on a bench waiting for the school bus, and we walk by and saw you reading it, what we would hear is laughter coming from you.”

Charles asked Winkler for advice for those who have learning struggles and aren’t doing well in school.

“It doesn’t matter how well you do in school. Sorry, but it’s true. You will meet your destiny if you keep your dream at the front of your brain,” he replied.

The second half of the event, Charles asked audience questions to Winkler and Oliver.

One of the questions was from a teacher wondering if the books can be introduced to fourth graders.

“I think fourth grade is the sweet spot. When we write we become 10-year olds in the fourth grade,” Oliver said.

The last question from the audience was if Winkler and Oliver would ever write a picture book.

“The next book we write is exactly that! One step above a picture book, but heavily illustrated and about a cutest duckling that has ever been written about in the history of children’s literature,” Winkler enthusiastically said.