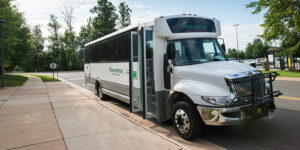 As the world deliberates at COP26, Mason can do more to help in the fight against climate change.

The fact that Mason is a commuter school is as clear as day. With the vast majority of students returning to campus this semester, the university’s flagship Fairfax Campus, located in the heart of NoVa’s suburbs, has been greeted with thousands of commuting students each morning. I myself am one of them.

There are a number of qualities that make Mason appealing to local students, and the university has admittedly done well in response to provide a diverse array of transportation options.

For one, the university operates a highly respectable shuttle fleet for inter- and intra- campus transportation. Shuttles can even take commuters to the Vienna/Fairfax-GMU Metro station. Carpooling is encouraged for both students and faculty, while commuters who choose to bike have a variety of biking resources on campus at their disposal.

But more can still be done. With COP26 underway in Glasgow, Mason students and faculty should be given a timely reminder of just how important of a role they can play in the fight against climate change.

Cars remain the predominant form of transportation for commuting students, most of whom arrive at campus alone. In 2019, 14 %of Mason commuters carpooled to campus, which actually led to Mason being recognized as one of the “Best Workplaces for Commuters.” While good enough to earn an award, 14% is simply not enough to help ensure a greener future.

So, what to do? Well, one option is to improve, or more appropriately, promote existing forms of alternate transportation. Students who wish to carpool should be given better incentives and lower parking pass rates. To make carpooling more accessible, Mason can institute an online registration system that allows for students to find potential carpool partners based on their class schedules and where they live.

With Mason Shuttles, it’s all about increasing access to the closest Metro stations. I propose adding two new shuttle routes to Metro stations: one to Wiehle-Reston East of the Silver Line, and the other to Franconia-Springfield of the Blue Line.

In anticipation of increased Mason student ridership on Metro services, I’d suggest Mason to consider becoming a participant in the Metro U-PASS Program which gives students unlimited rides throughout a semester, with ride fares being included in tuition.

On a slightly more controversial note, I’d also support placing a cap on the number of parking passes available to students, giving them out on a first-come, first-served basis. Remember, the purpose of these changes are to reduce the number of single-rider cars commuting to campus.

Another option is to promote on-campus living. Benefits should be provided to on-campus students and housing rates could be lowered. And while seemingly far-fetched, Mason could also consider purchasing surrounding real estate, mostly in the form of townhouses, for grad students or even undergrads to rent.

Everything I’ve said here may seem a bit much. I’ll admit, I haven’t really taken the full costs of these changes into account, and I don’t claim to be an expert on university finances.

Furthermore, my proposals are most certainly not the only changes that should be made to ensure a greener future. Mason students themselves should try to find solutions of their own to aid in this fight, at whatever cost necessary.

Important politicians and climate experts are currently making important decisions at COP26, some of which may never see the light of day. But those that do still have to be implemented by people like us. My proposals may seem drastic to some, but they are just one small piece in the global fight against climate change.