Mason’s Theater Department cut loose this Halloween weekend with their production of the famous jukebox musical “Footloose.” The production ran from Thursday, Oct. 28 through Sunday, Oct. 31, with a total of five shows.

“Footloose” the musical is a stage adaptation of the popular 1984 film of the same name, and first premiered on Broadway in 1998. Much like the film, the musical follows the story of Ren McCormack, a high schooler who moves with his mother from Chicago to the small town of Bomont, where everybody knows everybody else’s business, and where dancing has been outlawed altogether.

Through his relationships with Ariel — the daughter of conservative Reverend Shaw Moore — and his friend Willard, Ren is able to slowly begin to understand why Bomont is the way it is, and to work his way into the lives of its residents.

“Footloose at its core is about a community finding healing after a large loss,” said director Erin Gardiner. “I think audiences can relate to the story now more than ever.”

Drake Leach stars as Ren alongside Annie Graninger as Ariel. The pair brought the story to life with their dynamic performances and touching portrayals of the characters. Even the ensemble contributed hugely to the energy of the show, with large dance numbers to bring the boisterous fun to life.

In one number, “Somebody’s Eyes” — which conveys the stifling lack of privacy that comes with living in a small town — the cast made use of flashlights by shining light in our eyes, making it impossible to see what they were doing on stage while illuminating the faces of the audience. With this clever trick, they not only gave the show a visual dimension, but managed to turn the tables on their audience, switching the roles of who is seen and who is hidden.

The supporting cast stole the show with Walker Vlahos and Sophia Inserra playing Willard and Rusty, whose respective eager goofiness and charming wit made the show’s secondary romance undeniably sweet and likeable.

The highlight of the show came early in the second act, with a raucous performance of Deniece Williams’ “Let’s Hear It for the Boy” that brought so much energy the audience was nearly out of their seats cheering and clapping along.

While the soundtrack contains many popular ‘80s anthems like that, as well as Bonnie Tyler’s “Holding Out for a Hero,” it also contains many original songs written for the show.

“Yes, the show contains music from the soundtrack to the famous Kevin Bacon movie but it also has original music that was written for the Broadway show,” Gardiner explained. “We approach all the songs from a storytelling perspective, though, so that we get to sing the hits everyone knows but also keep the plot moving forward.”

In each of the songs, whether written for broadway or a pop anthem, the soundtrack for this show contains a mix of boisterous rock anthems and heart wrenching ballads that make it an engaging and emotional watch for any audience. The CFA’s website says that this show “celebrates the exhilaration of youth, the wisdom of listening to one another, and the power of forgiveness,” and it did not disappoint. 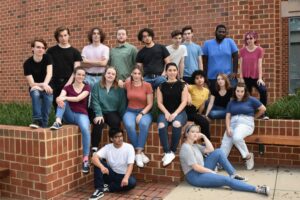 MASON TO OFFER MODERNA AND PFIZER BOOSTER SHOTS TO STUDENTS