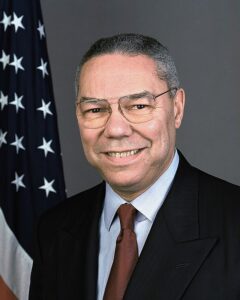 Former Secretary of State Colin Powell died on Oct. 18 after contracting a breakthrough case of COVID-19. Although fully vaccinated, he suffered from a blood cancer known as multiple myeloma that compromised his immune system. He was 84.

Powell began his career in the United States Army, where he reached the rank of general. He went on to become the national security advisor under Ronald Reagan and then served as the chairman of the Joint Chiefs of Staff.

Powell served as secretary of state under President George W. Bush from 2001 to 2005, when he resigned. He was the first Black Secretary of State

Most Mason students are too young to remember when Powell held office, but many are still familiar with the name.

Senior Nicole Mezher was upset when she heard about his passing. She attended Colin Powell Elementary School in Centreville, Va.

“He visited and was very kind, polite and inspiring. He would shake each kid’s hand and give us a smile, as though we were generals also … [I] hope he’s at rest now,” she said.

Another student, junior Jessica Smith, also had positive things to say about Powell.

“He was a great soldier, and he understood the importance of education,” she said.

Smith also stated that she had wished Colin Powell had run for president. Powell declined presidential runs in 1996 and 2000, despite popularity in both political parties.

“He was a born leader,” Smith said. “He will be missed, and I give my condolences to his widow.”

Not all students offered such kind words, though. Senior Steven Porte commented that Powell’s passing had “no big impact” on his life. He acknowledged that Powell was a very accomplished person but later added that “he also did a lot of not so great things.”

Powell was instrumental in building the case for the 2003 invasion of Iraq. He warned the United Nations Security Council that Saddam Hussein was in possession of biological weapons to garner international support.

Brandon Converso-Toth, a junior, said “He failed to double check intel at the cost of millions of lives regardless of nationality.”

Converso-Toth said that Powell should have faced criminal charges for his actions. “Justice was never served,” he said.

Marcel Gautreau, an economics Ph.D. candidate and the Vice President of GMU Young Americans for Liberty, also shared this sentiment.

“Those defending Colin Powell’s legacy are fawning over an architect of the multi-year aggression and brutalization of the Iraqi people whose primary objection to the Iraq war was that it didn’t have enough co-sponsors,” Gautreau  said. “If Colin Powell was a man of principle, I shudder to think what those principles are.”

Despite his controversial legacy, Powell was a highly decorated statesman. Among his many awards and recognitions, he received two Presidential Medals of Freedom, the Congressional Gold Medal and the Ronald Reagan Freedom Award.

KICK OFF YOUR SUNDAY SHOES WITH ‘FOOTLOOSE’