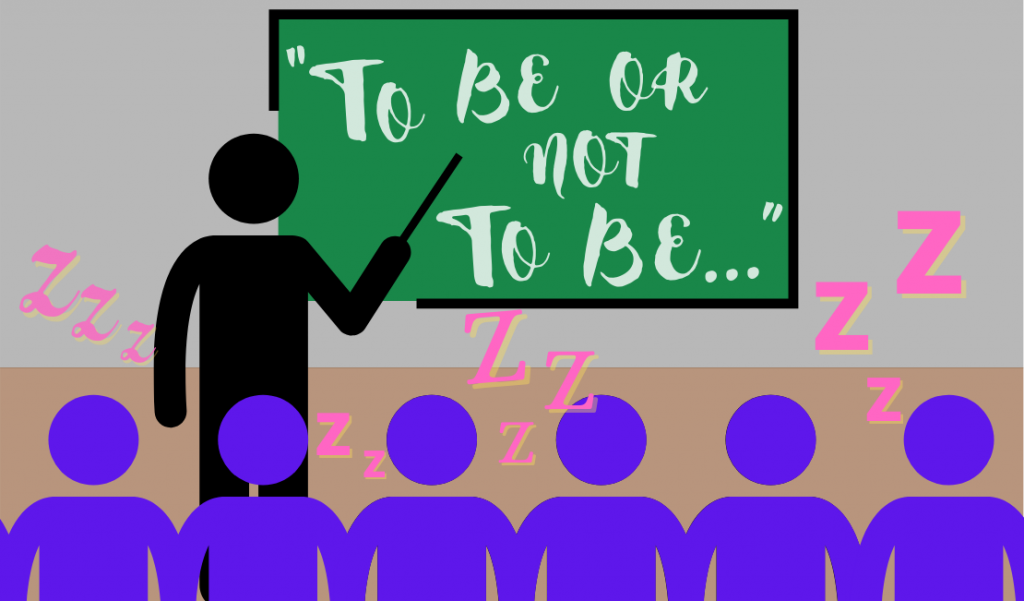 The distance created between Shakespeare and students is best showcased in the English classroom. English teachers may be annoyed by the consistent groan they hear from students after they announce the upcoming Shakespeare unit, but students groan for a reason. Shakespeare, for lack of a better word, is boring — when read.

Shakespeare didn’t write his plays to be read. He wrote them to be performed. A good actor that has studied and worked on Shakespeare’s words can help translate them for an audience. Shakespeare wrote with specific beats, rhythms and cues for actors that will at least make the language beautiful to listen to. But having your half-asleep classmate read out “to be or not to be” in monotone would be like fingernails on a chalkboard to Shakespeare.

Performing plays actually gives them context. Scripts are meant to be performed for the audience. An audience member can witness how sets, lighting and actors give meaning to old vernacular. Forcing Shakespeare on students creates avoidable resentment between them and Shakespeare’s work.

This sucks to admit because I love Shakespeare. In that ninth grade English class, I was one of the few kids that actually loved reading his words. The way he collided characters together and had them dramatize their thoughts in melodic language was revolutionary. Even when I didn’t fully grasp the meaning, reading his words was wonderful.

Most great stories we love today are rip-offs of Shakespeare. “The Lion King” is “Hamlet” with animals. “West Side Story” is “Romeo and Juliet” but with singing and dancing. “10 Things I Hate About You” is a very self-aware retelling of “The Taming of the Shrew.” Additionally, he is credited with adding thousands of words to the English language.

Sadly, teachers still meet students’ groans when they announce the Shakespeare unit. No matter how many times teachers show a video of a hip-hop artist rapping Shakespeare, the excitement just doesn’t come. Teachers have found that a majority of their students are disconnected and uninspired by his work. It’s time to switch tactics.

Shakespeare is too important to English to be ditched — but the same old way of teaching him needs to be ditched. A good teacher can make Shakespeare relevant without making Shakespeare boring. Save reading the entirety of his works for the upper-level English courses or the theater classes. The students in those classes have a much better chance of finding his works worthwhile.

That’s not to imply that general English classes should avoid Shakespeare entirely. Rather, they should use those classes to give the context of why his work matters. Instead of making the Shakespeare unit exhaustingly long, make it short. Focus on his impact on audiences, his contributions to language, and his story structures that are continually used as inspiration for modern tales.

Students can learn those lessons without reading “Henry V” from front to back. Teachers can use excerpts to highlight points of his work. Or, even better, find clips of actors performing that exact excerpt. It may not make his words exciting, but it should silence the groaning.

That may just be enough for a student to realize, “Hey, Shakespeare just made a sex joke!” Once they see that, Shakespeare will never be boring again.