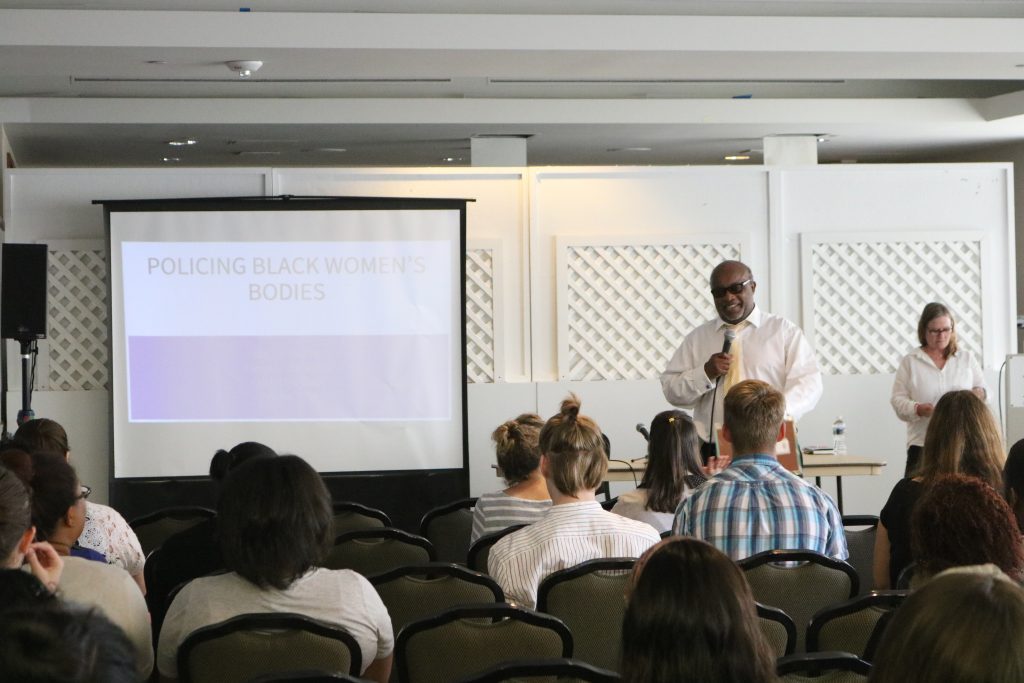 Last week, Mason held the annual Fall for the Book Festival in which 150 authors visited and discussed their different literary work. The festival kicked off on Wednesday, Oct. 10 and concluded on Saturday, Oct. 13. During this time, students were able to attend book discussions and participate in lively discussion concerning literature.

ECO-JUSTICE AND HIP HOP: POETRY FOR THE TIMES

On Oct. 10, George’s in the Johnson Center (JC) hosted poets Melissa Tuckey and Nate Marshall. Having their own distinct styles of poetry, each displayed work.

The poems Tuckey read to a private audience were based on a collection of poetry from the book, “Ghost Fishing: A Eco-Justice Poetry Anthology,” which she edited and wrote several pieces for. Tuckey worked in the environmental justice field before finding her way to poetry. She talked about how citizens need to be politically involved and conscious with what is going on in society. She stated how poetry can be an outlet for those in need of expressing oneself and how it benefits others to tell their story through poems.

Marshall hails from the south side of Chicago. His book, “The BreakBeat Poet,” which he co-edited, explains how hip-hop has played a major part in modern-day poetry. “People, in general, continue to progress, transgress and persevere through the larger, politic evil that try to insult their humanity,” Marshall said. “Poetry is, in part, important because it makes people feel connected to themselves and other people.”

“The BreakBeat Poet” and “Ghost Fishing” are available now on Amazon.

On Wednesday, Oct. 10, Dr. Angela Hattery and Dr. Earl Smith held an event in George’s in the JC about the book they co-authored, “Policing Black Bodies: How Black Bodies are Surveilled and How to Work for Change,” which focuses on the policing of black women’s bodies. During their discussion, Hattery and Smith introduced topics that will be added to the book’s second edition that will be released, such as including the policing of black bodies in sports.

Hattery spoke to a great extent about the injustice of African-American women face in U.S. prisons. She noted that Black women have experienced all kinds of abuse and “don’t need incarceration, they need intervention.” For most of the discussion, both Hattery and Smith outlined the many injustices that African-Americans face in all aspects of life, most notably as pregnant women and mothers.

Black women experience the highest infant mortality rate out of all populations of women not just in  the United States, but in most of the Western Hemisphere. Hattery also talked about laws “that appear race-neutral but are not,” and how these laws harm hundreds of thousands of African-American women everyday. Hattery also spoke about ways that people can help make change. “Speak their names,” Hattery said, “and if you don’t know about it, find out about it. Figure out why you don’t know about it.”

Dr. Hattery and Dr. Smith’s book, “Policing Black Bodies: How Black Bodies Are Surveilled and How to Work for Change” is available on Amazon.

LITERATURE OF THE CHINESE-AMERICAN EXPERIENCE

On Thursday, Oct. 11, two critically acclaimed authors, Vanessa Hua and Yang Huang, held a “chat with friends” in Dewberry Hall. Hua discussed her novel, called “River of Stars”, about a pregnant Chinese woman who travels to America in order to begin her life anew, while Huang talked about her short story collection,“My Old Faithful” which chronicles the life of a close-knit Chinese family.

Both authors spoke about the inspiration for their work. Huang’s book is based on her family and others she grew up around. Writing it, she said, “gave [her] perspective about growing up.” She was born in China and said that writing her stories was a “healing process” for her to deal with the political turmoil that has rocked China. Hua described the maternity hotels in California, where pregnant Chinese women stay during the last months of their pregnancy so their children are born in America.

Each author spoke about the reasons they write and and how family plays an important role in their work. Both want to write stories that everyone can relate to, no matter their background because, as Hua put it, “fiction has the capacity to move people to empathy.” Their thoughtful discussion of their work and inspiration gave an insight into what it is like writing about the Chinese-American experience.

Both Vanessa Hua’s “The River of Stars” and Yang Huang’s “My Old Faithful” are available for purchase on Amazon.