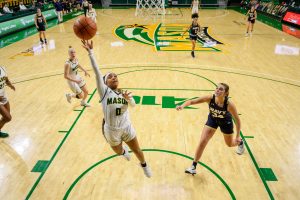 “First of all, it’s not over till it’s over,” head coach Nyla Milleson said after the women’s basketball team defeated Navy 72-68 to improve to 1-1. “I just really like the way that this team is staying together. We kind of used the word ‘team’ as kind of our mantra —  together, energy, aggressive, motor. And I think we, when we were good today, we had those four things.”

She acknowledged that this team was going to be a roller-coaster ride, with new players and returners settling into new roles.

For much of last season, the Patriots failed to get more than two or three players going on offense, something that hurt them time after time.

Milleson knows this will help make her team harder to guard and will ultimately help the team in the long run.

Jazmyn Doster made a name for herself

Doster had career-highs in points (22) and blocks (4) and also added 8 rebounds.

“I think without question from a year ago today she’s our Most Improved Player,” Milleson said after the game. She also credited Doster for her work ethic during the offseason, both while on her own with limited equipment and her work to catch up.

Doster, who did not start playing basketball until high school, was humble after the game.

“I see myself mostly as a defensive player. I never thought 22 points was gonna come,” she said. “But it definitely is a confidence booster. And [I’m] just hoping to not settle and get better the next game, and keep raising the bar.”

Milleson also added that Doster will be a big part of what the team does, especially until the team can get back Camarie Gatling, who is still recovering from offseason surgery.

Taylor Jameson is quietly coming into her own

“I thought we were at our best when Taylor Jameson was at her best,” Milleson said.

She also added, “There’s just no substitute for experience, and she’s played in two Division I games. So we’re just going to have to continue to get her experience. But I thought we were resilient and I thought a lot of it really started with her being able to pressure the ball and do some things that we haven’t been able to do the last couple of years.”

While it may not show up directly in the box score, Milleson acknowledged that the young point guard is able to change the game defensively.

As Jameson continues to gain experience, she will continue to help her team on both ends of the floor.

Mason returns to the court to take on Longwood at 6 p.m. on Dec. 1.