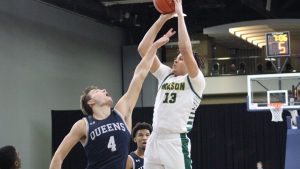 This past weekend, Mason men’s basketball tipped off their 2020-2021 season in the Walter E. Washington Convention Center.

The Patriots faced off against Queens University, Belmont University and Howard University in the DC Paradise Jam. Mason split its first two games in the event, defeating Queens Thursday (66-65), falling to Belmont Friday (77-67), and finishing the Paradise Jam with a win over Howard (84-70) on Saturday.

“I told our guys we found a way to win,” head coach Dave Paulsen said after Thursday’s game. “We’ve been off for eight months and there’s been a lot of uncertainty. That had an impact on our performance. We committed a ton of turnovers and made some poor decisions. There’s a lot to teach from and a lot to learn from. But it says a lot about a team with how it handles adversity.”

One player stood out for Mason this weekend — junior Jordan Miller.

Through Friday, Miller led Mason with team highs in points (19) and rebounds (9) while tying a career-best with four steals. Miller has now scored 10 or more points in 14 consecutive contests dating back to last season.

In the game against Howard, Miller posted his first career 30-point effort, starting 6-6 from behind the arc, and finishing 8-10 from three. Miller also added eight rebounds, securing a spot on the Paradise Jam All-Tournament Team. Over the three games, Miller averaged 20.0 points, 7.0 rebounds and shot 56.4 percent.

“My teammates did a good job of giving me open shots,” Miller said. “The basket felt huge … Overall, it was a great team win and I’m happy we can finish this tournament 2-1. We have a lot of things to improve upon, but this was a solid weekend for us.”

Senior Javon Greene and sophomore Josh Oduro led Mason in that game, combining for 32 of the Patriots’ 66 points. Greene also converted on 8 of 9 free throw attempts and grabbed three rebounds in 30 minutes.

In the Patriot’s second matchup against Belmont, they were left without senior AJ Wilson who sustained an ankle sprain in the game prior. The green and gold struggled to create offense in the second half. While three players made double figures, the Patriots failed to convert well behind the arc going 2-23.

“I think moving forward, we just need to lock in defensively and just make sure that we treat every defensive possession like it’s our last possession — like we’re down one with 30 seconds left,” Miller said. “I think we’ll be successful moving forward.”

Mason’s final game against Howard proved to be their best. The green and gold bounced back from their 9.0 percent in game two to 40.5 percent in game three, scoring on 17 of 42 attempts from behind the arc. Miller led the way with 30 points, and Xavier Johnson was in tow with 13 of his own.

The Patriots will head to the University of Maryland on Friday, Dec. 4 to take on the Terrapins at 3 p.m.

WOMEN’S BASKETBALL DEFEATS NAVY FOR FIRST WIN OF THE SEASON