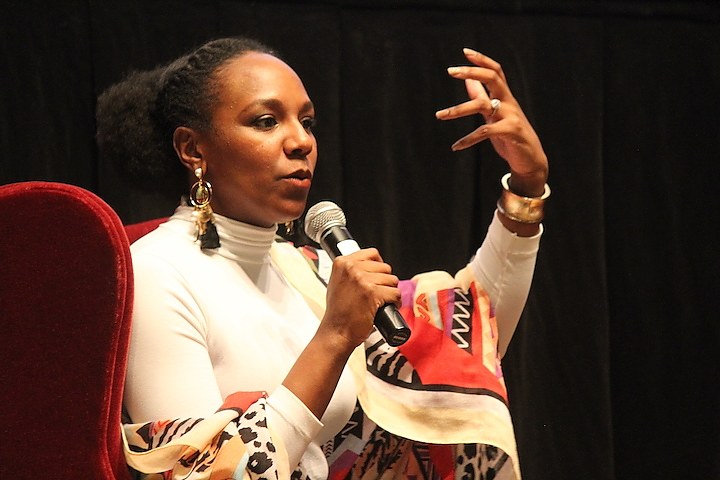 Film, politics and activism with the woman who climbed a flagpole in protest

On Tuesday, Oct. 20, Mason’s College of Visual and Performing Arts hosted Bree Newsome Bass, a filmmaker and political activist, in a virtual conversation about race in America and in art.

The event was part of The Activist-Artist: Centering Black Voices, a series dedicated to welcoming Black artists to speak to the Mason community about their experiences as artists and about the ways in which creativity, art and politics collide.

Newsome, along with Taj Koyaki, a sophomore film and video studies student, tackled topics ranging from the artist’s history in activism to her thoughts on the rising presence of Black representation in the horror genre.

Inspired by authors and filmmakers like Toni Morrison, Octavia Butler and Julie Dash, Newsome believes that the true mark of a good story are good characters.

On the topic of the inclusion of Black art in awards like the Academy Awards, Newsome urged the audience to “prioritize good storytelling.” She believes that awards can run the risk of distorting our understanding of what qualifies as good art.

“It’s not that there’s no value in [awards], but we shouldn’t make it seem as though unless we are included in this historically elitist white institution that our art is not valuable,” Newsome said. “If you had to choose between winning an award and making a film that has lasting cultural impact, I would choose the cultural impact.”

She is most widely known for an act of civil disobedience she performed at the South Carolina Statehouse. In 2015, Newsome scaled a flagpole in front of the building where a Confederate flag flew, and took it down herself.

Newsome explained to the audience that the flag was raised in the 1960s as a symbol of opposition to the rising civil rights movement. South Carolina put in place a law declaring that the flag could not be lowered until it was approved in the State House.

In the aftermath of a shooting at Emanuel African Methodist Episcopal Church in Charleston, where nine Black people were killed by a white supremacist, Newsome and other activists were outraged by the lack of response from the state and set out to create an act of dissent.

After training with a Greenpeace activist who had used the skill to climb trees in protest, Newsome climbed the pole to remove the flag in front of a crowd.

This was an act of deliberate civil disobedience, Newsome explained, bolstered by her history in the arts. The sight of a Black woman literally in the air, removing a symbol of oppression in the public eye, was an intentionally poignant visual.

“I called upon my background as an artist in that moment. We were deliberately thinking about the image that could be created in having a Black woman take the flag down,” she said. “We were very deliberate in attacking a symbol of racism by creating not just an act of civil disobedience, but an image of dismantling racism.”

Though the removal of the flag is her most prominent act, her work in activism and film is far-reaching. She holds multiple awards for her work including the NAACP Image Award-Chairman’s award.