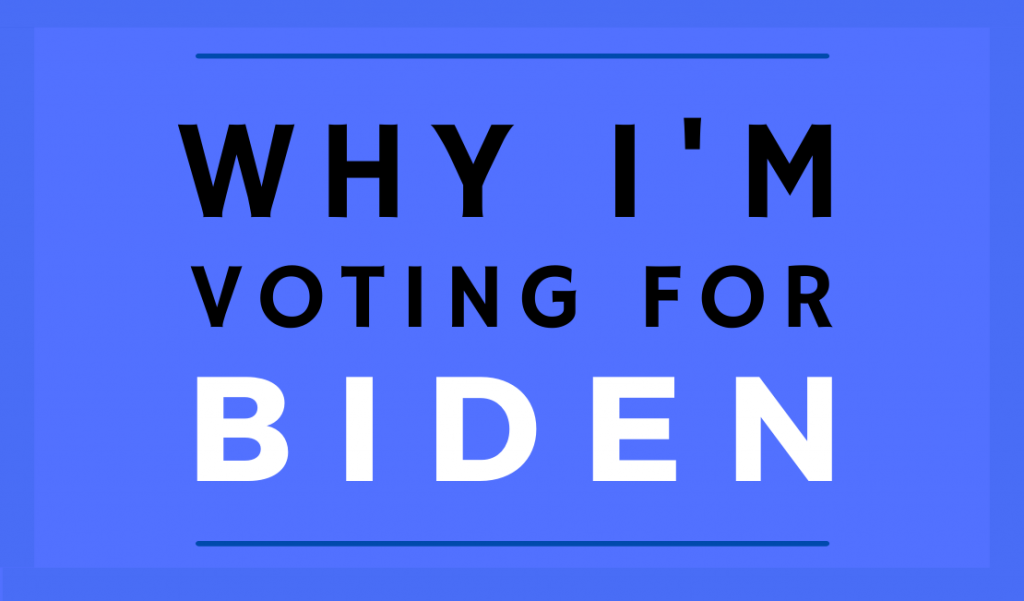 In 2016, I was left feeling embittered by a political system and a society that allowed someone like Donald Trump to be elected. At only 16, I felt frustrated that I had no say in such a monumental election.

But this election is different. This year, I have a vote. And this year, I cast that vote for change.

I started this election cycle as a staunch Elizabeth Warren supporter. It wasn’t just that she was a woman, but that she had good policies on the things most important to me like environmental injustice, healthcare, universal childcare and student loan debt relief.

But the day she dropped out, I realized that we would likely be left with two old white men in their 70s as our choices in the general election. I’ll even admit I cried when I read the remarks she made to her campaign staff that day. But the next day, I realized I had only one choice: to settle for Joe Biden.

While I’d much rather vote for a third-party candidate and say “screw partisanship,” I recognize that the American presidential election process is not designed to favor a third-party winner. (Thanks, electoral college.) But settling for Biden is not voting for the lesser of two evils — for me, it’s voting against evil.

Since 2016, Trump supporters have stood by him while he has proven time and time again that he is a xenophobe, a homophobe, a transphobe, a racist, a misogynist and a climate change denier. All the while, Trump’s incompetence has caused this country to suffer greatly. From his mishandling of the pandemic and his inability to denounce white supremacy during the first debate to his administration’s downplaying of climate change, Trump has cost this country too many lives and has rolled back much of the progress made in the previous administration.

I recognize that the Biden-Harris ticket is far from progressive or perfect. They certainly have a few political skeletons in their closets, but I choose to also consider the views they hold today and the plans they have for tomorrow — because for me, this election isn’t about Joe Biden or Kamala Harris. It’s about the planet, the LGBTQ+ community, Black lives, healthcare, women’s rights, immigrants and so much more.

We have a lot of work to do, and while electing Biden and Harris will not solve every issue plaguing us in Trump’s America, it will make the chance of progress greater. And I choose to vote for a chance of progression, not certain regression.

No matter if it is in a few months or four more years, Trump’s presidency will end and the smoke will clear. And all his supporters will have to face the many lives they hurt with their vote.

I want to be on the side of history that voted for environmental, reproductive and racial justice, for immigrant rights, for the LGBTQ+ community and for healthcare. My vote will be for a president who will not act like a middle school bully on social media, who will not make the United States the laughingstock of the world, who will not refuse to denounce white supremacy, who will not brag about grabbing women by their p—–s. I want to be able to look at my loved ones and say that I voted for their future and their safety. That’s why I’m voting for Joe Biden, and I hope you will too.

Editor’s note: This piece is part of an Election Day special. Click here to read staff writer Alex Madajian explain why he is voting for Republican Donald Trump.

HOW DONALD TRUMP EARNED MY VOTE