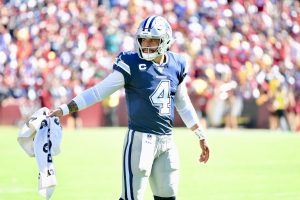 Despite losing star QB Dak Prescott to a season-ending injury, Dallas Cowboys can still make the playoffs because they learned from the lessons of 2016.

Entering the 2016 NFL season, fans of the Dallas Cowboys all thought the same thing: “It is finally our year.”

The team retained its core that went 12-4 and made the divisional round of the playoffs in 2014. They upgraded at RB by selecting Ezekiel Elliot with the fourth overall pick. QB Tony Romo was fully healthy after missing 12 games in 2015 due to multiple clavicle injuries. The team was also in its second season of Rod Marinelli’s defense that held up admirably in 2015, despite the team’s 31st ranked offense never putting them in a position to succeed.

All of the stars were aligning for a spectacular season. But soon, the sky would fall.

In the second minute of the third preseason game, Romo stepped up into the pocket to avoid pressure. As he scrambled toward the line of scrimmage, a Seattle Seahawks defender came from behind and tackled Romo right as he tried to slide.

Romo got crunched. The collision resulted in a compression fracture in Romo’s back that would force him to miss at least half of the regular season.

A season that was doomed to tragedy was saved by the team’s backup quarterback: a rookie from Mississippi State named Dak Prescott.

After losing by one point to the New York Giants in the season opener, Prescott led the Cowboys to 11 consecutive wins and the No. 1 overall seed in the NFC playoffs.

While Prescott’s success was entirely unpredictable, it was his play as the team’s backup quarterback that saved the season.

In 2020, a similar story is unfolding for the Cowboys.

After an offseason in which the Cowboys were considered Super Bowl contenders, they have since lost their starting tight end, Pro-Bowl linebacker, All-Pro left tackle, starting left guard, center, and their top two starting cornerbacks all to injury within the first four weeks of the season.

The Cowboys’ hopes of a Super Bowl were burning low after a 1-3 start to the year. But in Week 5, the flames were cruelly extinguished after Prescott suffered a gruesome ankle injury against the Giants.

Prescott needed surgery on his ankle immediately. His official diagnosis is a right ankle compound fracture and dislocation, and he will miss the rest of the season.

With all of the injuries the Cowboys have sustained, including one to the most valuable player on their team, there is reason to believe the Cowboys’ season is unofficially over.

That might not be the case, however, because Dallas learned how important the backup quarterback position was when Prescott filled in for Romo four years ago.

In May, the Cowboys quietly signed former Cincinnati Bengals QB Andy Dalton to a one-year deal just days after he was released by Cincinnati.

On June 22, when Prescott signed his franchise tag, Dalton instantly became the best backup QB in the NFL.

While Dalton is an accomplished player in his own right, he is an inferior quarterback to Prescott. Some may question Prescott’s true skills, but the statistics don’t lie. 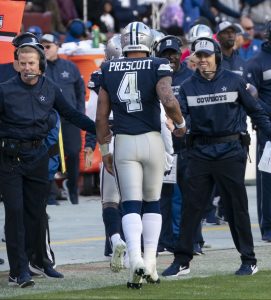 It is correct to say Dallas is a worse team with Dalton under center than Prescott. But the team is not drawing dead with the Red Rifle.

Dalton knows a thing or two about taking teams to the playoffs. He led the Bengals to five consecutive playoff appearances from 2011-2015, winning the AFC North twice. His regular-season record over that span was 50-26-1.

While the Bengals’ stout defense was the primary reason for its success in the previous decade, Cincinnati was not winning in spite of Dalton.

Dalton is a three-time Pro-Bowl quarterback whose QBR hovered around 50.0 with Cincinnati, including a spike to 70.0 in 2015.

Dalton is capable of playing well and winning games in the NFL. There is no question about that.

Now, is Dalton capable of carrying this Cowboys team to a Super Bowl? It’s doubtful. After all, he has not shown any playoff prowess. He is 0-5 in his playoff career. But there are reasons for optimism in the regular season for the new Cowboys signal-caller.

Firstly, this Cowboys offense gives Dalton the best skill position players he has ever had. With Amari Cooper, Michael Gallup and CeeDee Lamb on the outside and All-Pros Zack Martin and Ezekiel Elliott ready to ground and pound, there is no shortage of options for Dalton and offensive coordinator Kellen Moore.

Secondly, and perhaps most significantly, the NFC East is the worst division in the NFL. And it isn’t particularly close.

At the end of Week 5, the Cowboys sit in first place in the NFC East with a 2-3 record. The rest of the division has two wins combined.

The Cowboys’ biggest competition, as they have been for the last few seasons, are the Philadelphia Eagles. The Eagles are a half-game behind Dallas with a 1-3-1 record after tying with Cincinnati in Week 3.

Looking at the teams’ schedules, the Eagles are already 0-1 in division play with a Week 1 loss to Washington. Dallas is 1-0 after defeating the Giants.

The Eagles won the NFC East last season so they have to play a first-place schedule in 2020. This includes matchups against Green Bay and New Orleans. Instead, Dallas plays Minnesota and the Falcons (who they already beat in Week 2).

In a year affected by COVID-19, the range of possible outcomes in this NFL season is as wide as ever. Just imagine how it will look on Jan. 10, 2021, when the 7-9 Dallas Cowboys are hosting a 10-win team in an NFC Wild Card game.