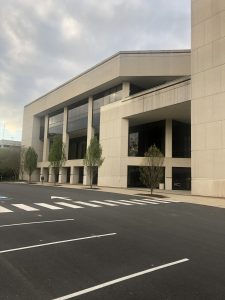 On Wednesday, June 10, the College of Visual and Performing Arts (CVPA) issued two press releases stating that both the Center for the Arts and Hylton Performing Arts Center will be suspending all traditional live performances through 2020.

On March 13, Mason closed all performing arts venues in order to stop the spread of COVID-19.

This decision made in response to the global pandemic will apply to all performances that would typically be held in the Center for the Arts Concert Hall, TheaterSpace, Harris Theater, the deLaski Performing Arts Building and the Hylton Center, located on the Mason Science and Technology campus.

On the same day the releases were issued, Rick Davis, the dean of the College of Visual and Performing Arts addressed the decision to suspend the 2020 season in a YouTube video.

“Armed with as much information as we could gather on the science, public health, and risk mitigation aspects of the virus required to be in place when attending or participating in a performance, we concluded that there is no good way to provide a safe, comfortable and artistically satisfying environment inside our spaces as long as the current social distancing guidelines are in effect,” he said.

On June 23, Davis and Programming Director Adrienne Bryant Godwin will be hosting a live digital conversation on Facebook and YouTube discussing the decision to suspend the season at the Center for the Arts. They will hold a similar conversation about suspending the season at the Hylton Performing Arts Center on June 24.

While concerts in the traditional sense are on hold, the CVPA launched Mason Arts at Home in April —  a digital platform that hosts performances and more —  to create a way for users to engage with the work of Mason students, faculty and guest artists.

Protestors March Through Campus in Memory of George Floyd and Others