On Monday, in the wake of the death of George Floyd, peaceful protesters gathered in downtown Manassas to show solidarity with the Black Lives Matter movement and express their outrage over numerous instances of police violence.

This protest took place on the seventh day of civil unrest in the U.S. Many cities across the country have conducted peaceful protests against police brutality since Floyd’s death on May 25 in Minneapolis, Minn.

“With all these other killings, there’s folks always able to say ‘Hey it was ambiguous, we don’t know, let’s wait,’” said Kenny Boddye, a Prince William County Board member participating in the protest. “This, there’s no way you can spin it any other way.”

“It started as I tweeted about it … I got hundreds of people messaging me, and here we are,” Kargar said.

Kargar explained that the overall goal of this particular protest was to collect signatures from police officials for an agreement stating that the Manassas City and Prince William County police chiefs will resign if any member of their staff shoots an unarmed Black person. 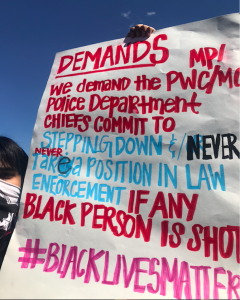 Additionally, Kargar and other protesters were calling for Prince William County Sheriff Glen Hill to sign the agreement as well.

Early in the afternoon, protesters gathered in a nearby parking lot of Manassas’ Train Depot, where several municipal officials and principal organizers set the tone for the protests.

Protesters young and old formed a long line down the streets of Manassas, chanting together as they marched.

Loretta, a protester who declined to give her last name, explained that she felt called to attend this protest after hearing of Floyd’s death.

“It’s so unfortunate that an incident like a racist cop, basically murdering a black man in front of tons of people has ignited this crazy firestorm across our whole country,” she said.

Loretta went on to express that inaction is no longer an option.

“It’s not okay to just stand by anymore and just hope that the problem goes away, because it’s not,” she explained.

After several minutes of urging from the crowd of protesters, officers kneeled for a moment of silence for Floyd.

Afterwards, a diverse group of speakers addressed the crowd that gathered at the judicial center, including human rights lawyer and congressional candidate Qasim Rashid. “The only way that we are going to move forward,” Rashid told the organizers, “is by standing together and recognizing that the justice we’re fighting for is the bare minimum.”

In addition to the slate of invited speakers, protesters from the crowd delivered speeches, poems and overall frustrations with the status quo from law enforcement across the country.

Throughout Monday’s protest, officers and protesters alike handed out bottles of water to members of the crowd that gathered at the judicial center. There were no instances of physical violence against protesters.

Kargar made sure anyone interested in joining the protest was wearing a mask. Most of the  protesters in the crowd were masked, but several members of the sheriff’s office were masked.

The protest dispersed later Monday evening, and Kargar felt confident that the protesters’ voices were heard.

“[Sheriff Hill] is willing to work with us if we come up with a better legal contract,” Kargar explained.

Though protesters did not get signatures from Prince William County Police Department officials, Kargar explained that she is not planning to stop until these demands are met.

“This was just opening the door,” Kargar said.

As seen in many of the protests around the country, social distancing policies, particularly in terms of physical spacing, created to combat the novel coronavirus were largely ignored by the people in attendance.