Mason community gathers for a peaceful protest on Fairfax Campus 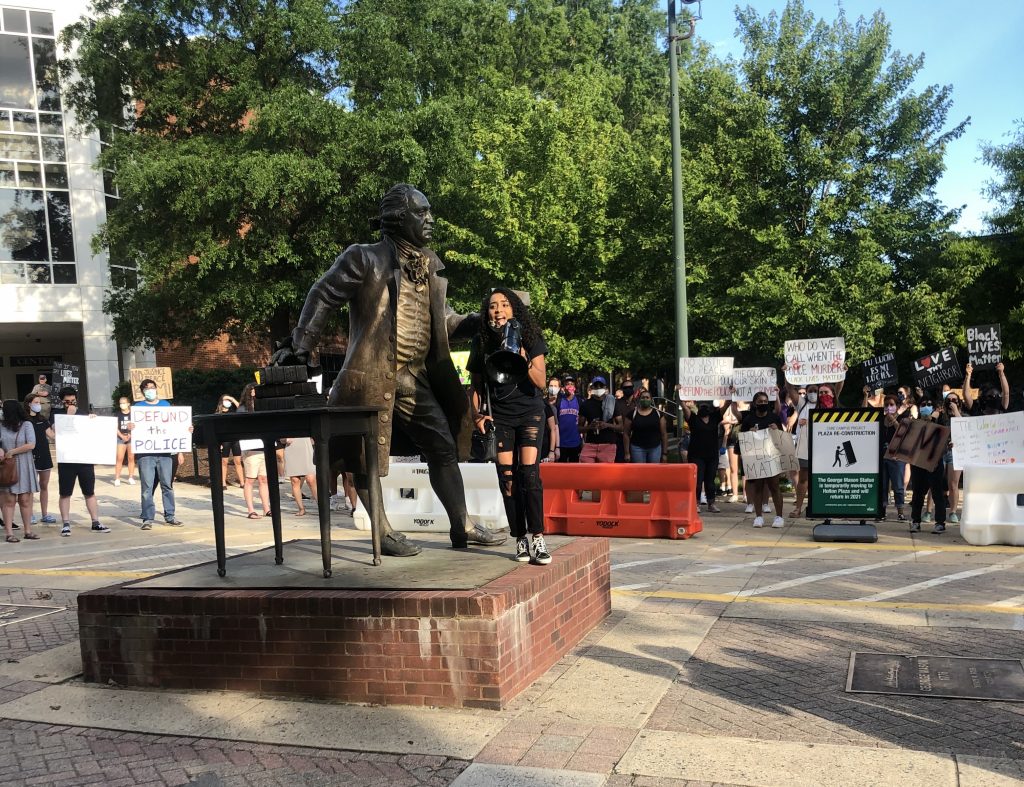 On Friday, June 12, organizers gathered at the Mason Field House for a peaceful evening demonstration to honor the death of George Floyd and other victims of police brutality.

After an opening prayer, demonstrators then left the Field House and marched to the lawn of Merten Hall, where the event’s organizers, along with guest speakers including Office of Diversity Inclusion and Multicultural Education + LGBTQ Resources’s Brandi Blake, addressed the audience.

“I’m not here today as an employee of George Mason University,” Blake said to the audience. “I’m not here to represent my department or to stand here on behalf of my division. I come here today simply as a Black woman to speak out against white supremacy, anti-Black racism and police brutality.”

“This is not a celebration,” she continued. “Maybe it’s because you heard George Mason was having a peaceful protest and you felt like that’s something you can be a part of, or maybe you came to hold up your signs and take photographs for Instagram. I’m not sure. Or maybe you wanted to be here in solidarity because you truly believe that Black lives actually matter.”

Other speakers included Janell Armstead, one of the event’s organizers, and Student Body President Shelby Adams. Speakers listed the names of other victims of police brutality, provided inspirational words and held a moment of silence for George Floyd.

Afterwards, protestors marched through campus to the statue of George Mason located on Wilkins Plaza where another organizer, Marissa Strang, led the crowd through a variety of chants and said a few words before concluding the event.

In 2021, the university plans to complete a reconstruction of Wilkins Plaza that will include a memorial to James and Penny, enslaved people owned by the university’s namesake, which protestors addressed during the demonstration on Friday.

“If you are here and you are saying these chants and you are yelling with us, I hope that you understand the words that you are saying,” Strang said. “These are not cheerleading chants, this is not a fight song; this is real pain coming from real people.”

Face masks to prevent the spread of COVID-19 were required and nearly all in attendance complied. Police officers helped to escort protestors across Ox Road but otherwise had little presence at the march.

“Words are not enough. Words disappear after a while,” Armstrong told the crowd. “There’s enough people and there’s enough Black students on this campus, and we can make a difference.”