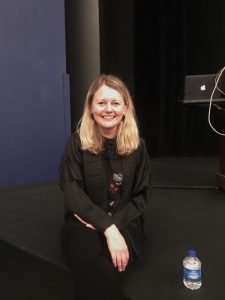 Mason students were given the opportunity this past week to peer behind the scenes of the iconic portraits of Barack and Michelle Obama in the most recent installment of the School of Art’s professional lecture series, Visual Voices.

The lecture, which took place on Feb. 7 in the Harris Theater, featured Dorothy Moss, the curator of painting, sculpture and performance art at the National Portrait Gallery, and the coordinating curator of the Smithsonian’s Women’s History Initiative.

Moss’s presentation, titled “Active Presence at the Smithsonian Portrait Gallery: Reverberations of the Obama Portraits,” explored the process of creating those portraits from the team of museum curators to the public reception of the final product.

She provided an insider’s perspective on how the artists Amy Sherald and Kehinde Wiley were chosen, and how they worked with the Obamas to create the iconic portraits we now know. Moss described how she was able to watch one of Michelle Obama’s portrait sittings with Sherald. She noticed a sister-like bond between the two women developing as they worked.

Moss quoted Michelle Obama’s comment at the unveiling of her portrait: “I am thinking of all the young people, particularly the young girls of color, who in years ahead will come to this place and they will look up and see someone who looks like them hanging on the wall of this great American institution.”

For Barack Obama’s portrait, Moss explained how Wiley inverted power dynamics by creating an image of the former president that was familiar and approachable.

As Moss spoke, an image was projected on the wall behind her: A little girl standing in front of Michelle Obama’s portrait, awe-struck. It was a photo that had gained a lot of attention following its release, and took on an extra air of significance with the new context provided.

“I didn’t know the backstory behind the Obama portraits. I haven’t been [to the gallery] in a long time, so this definitely made me see it in a different light,” said Raquel Bumgarner, a junior art and Visual Technology major. “You get to learn more about the art world outside of college.”

Beyond the Obama portraits, Moss highlighted the ongoing work of the National Portrait Gallery’s push to increase diversity and inclusion.

Moss described a “deliberately planned mix of curatorial projects of the National Portrait Gallery, designed to implement change and move the museum towards the goal of a more inclusive representation of American history through portraiture.”

A total of eight Visual Voices lectures were planned throughout the 2019-2020 school year by the School of Art. Moss’s presentation was the fifth in the series, but the first of the spring semester. Mason will be hosting Melanie Buffington, professor of Art Education at VCU, in the next installment of the series on Feb. 20.