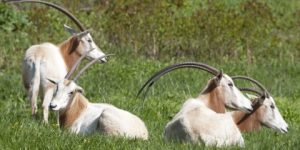 Partnership works to reintroduce endangered species, the scimitar-horned oryx into the wild

Since 2012, Mason has had a unique relationship with the Smithsonian Institute and the National Zoo. Students at the Smithsonian-Mason School of Conservation (SMSC) have been able to work with employees of the Smithsonian to learn about conservation policy and how to care for animals in human care and biodiversity.

“Biodiversity is the fabric of life,” Steven Monfort, the director of the National Zoo, said.

What makes SMSC different from other institutions is that students are able to learn directly from respected scientists with extensive experience and get to work hand-in-hand with professionals in the field as they conduct conservation research.

In some instances, students get to work with a species called the scimitar-horned oryx, an animal that lives in Northern Africa and looks like a cross between a cow and gazelle. What sets it apart is its white-brown coat and a set of curved horns that can reach three feet or longer.

At the Smithsonian Conservation Biology Institute (SCBI), in Front Royal, Va — where the SMSC campus lies — there is a breeding population of these animals. Many different species live at this Smithsonian facility.

Most of the animals at SCBI are endangered or nearing extinction. The scimitar-horned oryx is extinct in the wild. The oryx was over-hunted and, because of human interactions, disappeared from its natural habitat. Today, there are very few places that this animal can be seen worldwide — and SCBI is one of them.

The Smithsonian has kept a healthy population of these animals in the National Zoo to educate the public on the loss of this species. They also have oryxes at the Front Royal campus to conduct research and help reintroduce this species into the wild.

During the fall 2019 semester, junior Evelyn Orellana conducted a behavioral study of the oryx. She looked at video feed of oryxes to determine how they behaved when humans were not around.

“I didn’t know anything about the species at first,” Orellana said. “But, after doing the research, I realized how important they are to the ecosystem and how much we need the oryx in the ecosystem.”

For the spring 2020 semester, senior Jessica McCabe has been able to help clean pens, prepare meals for the oryxes and learn about the animals in an up-close-and-personal way.

In 2018, a female oryx was born. This gave hope to researchers about the species and its survival.

In recent years, the Smithsonian has tested radio collars at their facility to track animals around the campus. They are perfecting the technology to track the oryxes after reintroduction, making sure the animals do not get too close to human settlements or hurt themselves.

In 2016, there was a successful reintroduction of 23 scimitar-horned oryxes in Chad, a mostly-desert country just west of Sudan. Its northern regions are part of the Sahara, which is a perfect habitat for the oryxes. Each individual oryx that was released into the wild was carefully tracked with a radio collar — the kind tested at SCBI — to make sure they were living healthily in the wild.

The Smithsonian is committed to the continued health of this species.