The CFA hosts its first show of the season, “Figures of Speech” 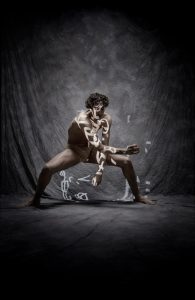 The legendary choreographer Alonzo King views the world as lines — both straight and circular, related to all things. To commence the spring 2020 season, the Center for the Arts (CFA) hosted the Alonzo King LINES Ballet company on Saturday, Jan. 25.

Their collaborative piece, titled “Figures of Speech,” draws from the research of Bob Holman, a linguistic archivist and poet who focuses on the endangered languages of the world. Set to the words of many of these languages, as well as a few “made-up languages,” the impressive and expressive movements of the dancers occupied the stage.

Prior to the performance, Mason professor of dance Caroline Rocher, who danced with LINES Ballet for seven years, spent some time talking about the company. This informative session allowed audience members, many who have never seen a LINES production, to understand King’s creative process in producing a show.

“[King’s] interested in finding the truth,” said Rocher. “When you do the step, go to the bottom of the step, go deep. Try to work with imagery, try to embody the shape or form of the idea.”

According to Rocher, King has a strong commitment to collaboration. In “Figures of Speech,” a combination of endangered languages — such as Ainu, which, according to the program, has just 10 speakers left — created languages, and music composed by Alexander MacSween set the soundtrack for the dancers.

During the hour in which the show runs, the audience is enraptured by the dancer’s movements. As Rocher predicted, the dancers embodied a concept — the idea that languages are disappearing. Their mission is to make the audience feel this particular loss.

In the post-performance discussion with the company’s Ballet Master, Meredith Webster, she describes the concept as “grasping” at something that is disappearing.

In addition to the collaboration with Bob Holman, specifically with his vast archive of languages, King also used sounds and languages from the company’s community, from past students to the company’s dancers themselves.

“Alonzo often makes choices for what gets included in the piece based on the chemistry in the studio of how the movement and the sound come together,” said Webster.

Both Rocher and Webster discussed how the productions, including “Figures of Speech,” are “always evolving.”

“Some things hit their bodies in a not-so-natural way, but over time, it becomes natural to them,” Webster said.

As the commencement show for the spring 2020 season, “Figures of Speech” surely left a mark on its audience.