Reopening the “front door to the university” with the CVPA 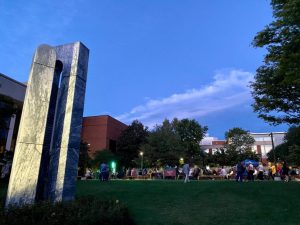 In celebration of the reemergence of live performance and to mark the twentieth anniversary of its founding, Mason’s College of Visual and Performing Arts (CVPA) hosted “Arts Emerging: A celebration of renewal,” featuring performances from alumni, students and community members alike. The event took place on Sept. 25 at the Center for the Arts, Holton Plaza and Buchanan Hall.

“The arts have become one of Mason’s signature tools for the University to engage with its community and Arts Emerging is a powerful example of that in action,” said Rick Davis, dean of the CVPA, in a press release distributed by the Center for the Arts.

This sentiment was echoed by University President Gregory Washington when he addressed the audience, using the metaphor that the arts were “the front door to the university,” explaining how inviting community members in with music, theater and other fine arts then allows them to explore all the other things Mason has to offer.

Holton Plaza was transformed into a stage for a revolving door of performances, opening with a preview of Mason School of Theater’s upcoming performance of “Footloose.” The cast danced and sang, giving the audience a glimpse into what was to come for the Oct. 28-31 run of the famous jukebox musical.

Following “Footloose” the dancing didn’t cease — the School of Dance was another standout with a performance of “Pause: Repeat,” a dance that was entirely choreographed and performed during the pandemic.

“This is the first time we’ve been able to perform this without masks, so to see the smiles is refreshing,” remarked Shaun Boyle D’Arcy, a member of Mason’s Dance faculty.

While those performances went on, an array of other art forms were displayed throughout the neighboring Buchanan Hall. At the entrance, the Mason Mural Brigade encouraged children and adults alike to contribute to a sidewalk chalk masterpiece, while an exhibit of photographs by Mason alumna Zia Palmer hung on the walls inside. Also on display in Buchanan Hall was a presentation of student filmmaker’s works, as well as a room dedicated to Mason’s Computer Game Design program.

To wrap up the outdoor performances, the Green Machine 8th Regiment Band — a group of musicians playing 1860’s brass ensemble music designed to imitate the style of front-line musicians — finished their set by marching towards the CFA lobby with the audience in tow.

To open the next phase of the evening, Washington spoke about the struggles the performing arts were faced with when the pandemic struck.

“We didn’t know how these great actors and performers were going to be taught,” he said. “But here’s the thing — the show did go on.”

Washington’s speech was followed by a showcase of alumni and student talent, ranging from singers to computer game design experts, to display the range of Mason’s art education and the benefit of having a Center for the Arts within a community.

The event concluded with what Davis referred to as “contagious philanthropy,” encouraging attendees to raise their hands to commit to donations towards student scholarships in the hopes that seeing the generosity of others would prompt more attendees to donate as well.