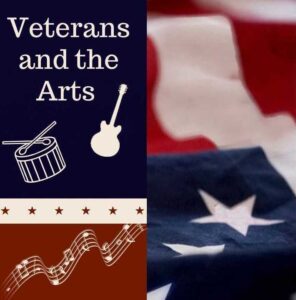 At the Hylton Performing Arts Center, in their ukulele workshop, instructor Glen McCarthy goes over the simple chords of familiar tunes, sampling “Mary Had a Little Lamb” and the Beatles’ “Eleanor Rigby.” While at first glance this scene seems to be no more than a standard music class, those basic tunes play an essential role in community building for Northern Virginia’s veterans.

That workshop is just one of many free community resources provided by the Veterans and the Arts Initiative, designed specifically with veterans and their family members in mind. Through workshops and events, they have created a space for creative exploration and community contact.

“I think that artmaking is a universal experience. The art world should not be exclusive to anyone, no matter what community or workshops you’re a part of,” said Emily Fasick, program assistant of the initiative.

The first rumblings of this effort began in 2014, when the Hylton Center began looking at ways they could cater events and services to veterans in the surrounding communities.

At around the same time, Niyati Dhokai, the current program director, was given the opportunity to teach music to a veteran in recovery from a traumatic brain injury. Inspired by her time with that person, Dhokai began to look around for other veterans who might benefit from the same learning modifications she had used.

She began a neurorehabilitation program, focusing on using music as a tool for social integration. Recovery from traumatic injuries, as she explained, is a process that can take years. Things like art and music can serve to recover a sense of normalcy, whether it be a rekindling of an old passion or simply the desire to learn something new.

In 2015, Dhokai joined the Hylton Center’s initiative as a consultant. That year, they held a Veteran’s Day festival featuring a wide range of short performances and workshops. From that event, they began communicating with community members to assess what aspects of it were well-received and should be expanded on.

Over the years — drawing on community feedback, research and Dhokai’s experience with neurorehabilitation —  they were able to develop the initiative into what it is today.

Since its beginnings, it has developed into several successful workshops, including a guitar class, a ukulele workshop, a songwriting workshop for children of veterans and more. According to their website, the initiative has served over 10,000 “military-connected people” since 2014.

When the pandemic struck, the team running the initiative was faced with a challenge — to find a way to maintain the sense of community and normalcy that they wanted to provide for their participants. They shifted to a virtual model, utilizing Zoom’s webinar feature to present workshops online.

Currently, workshops are operating on a hybrid model. Participants have the opportunity to attend in-person, or they can tune into those same meetings via Zoom. There, the camera focuses on an instructor while another member of the team fields questions in the chat.

Organizers asked the group of participants why they were there, and what they hoped to gain from the workshops. One participant who identified herself as Kelly, a veteran who served for 43 years, chimed in via Zoom.

“The scheduled veterans ukulele lessons really give me something to look forward to, and to reinforce the music theory … Many thanks for the virtual format which allows me to participate from afar,” Kelly said.

This appreciation for the hybrid model was echoed by many of the participants. Both Dhokai and Fasick indicated that they would like to maintain the hybrid format even once the pandemic no longer requires it in an effort to maintain the added level of inclusion virtual workshops provide.

WHY SECRETARY CARDONA SHOULD ENCOURAGE DISAFFILIATION