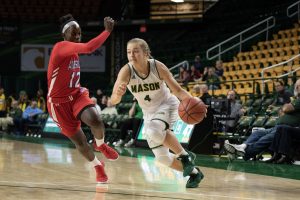 Despite pulling within six midway through the third quarter, Mason fell apart down the stretch, falling 82-63 to one of the conference’s top teams.

Nicole Cardaño-Hillary can hold up against very physical defenses

Nicole Cardaño-Hillary was knocked down several times by the Rams’ aggressive defense. Not only did she keep getting up, she kept making free throws.

She finished with 28 points and went 11-12 from the free-throw line.

“You really just have to be ready for it and my team and I did a really good job of taking that physicality and not just like, giving up,” said Nicole Cardaño-Hillary.

“We went back at ’em and I thought, I thought our team did a really good job of that and I’m going to very proud of them,” she continued.

This is “the end of a brutal stretch”

During the press conference, Milleson referred to the first seven games as a “brutal stretch” as they faced five of the top seven teams during that period.

The loss to VCU also is the team’s third game in seven days, a stretch just three teams in the conference have to do this third season.

While there are no easy wins in any conference, the Patriots have reached a beacon of hope and face just one of those top teams again this season.

Knowing a difficult stretch of games is behind them, Milleson said, “Our focus just really has to stay on us stepping on the floor and getting better every day, continuing to work on that chemistry on the floor. And I thought today we saw a little bit of that in stretches.”

Camarie Gatling needs to stay out of foul trouble

Camarie Gatling played just 15 minutes, her second-lowest total this season. Gatling’s presence below the basket would have helped the Patriots, as the Rams scored 40 points in the paint.

Though she has been inconsistent this season, when Gatling can avoid fouling she has proven herself to be talented under the basket on both ends of the court.

Mason heads on the road for the next two games but return home for the Sue Collins National Girls & Women in Sports Day against UMass on Feb. 5 at 7 p.m.

Grasping at What is Endangered